“As a Doctorate degree holder and a business magnate, I personally feel insulted that a mediocre with F9 parallel in WASC is aspiring to lead my state.”
By abiodun KOMOLAFE 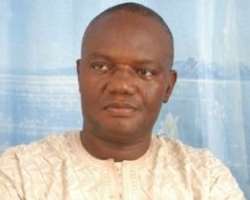 “As a Doctorate degree holder and a business magnate, I personally feel insulted that a mediocre with F9 parallel in WASC is aspiring to lead my state.” Osun Governorship Aspirant

In a matter of weeks, voters in Osun will go to the polls to elect a successor to Governor Rauf Aregbesola. With a record-breaking total of 48 governorship candidates from different political parties fighting hard to take over the tenancy of Bola Ige House from its current occupant, September 22, 2018is expected to be a battle of wits between solemn promises and fairy tales. From the disputed 'Ajele' to the notorious 'Ajobiewe'; and from the relatively unknown to the creatively unsung, I have no doubt in my mind that it will be a supremacy clash between 'people power' and problematic commitments characteristic of those who wish to turn the future of our state into a global pastime.

In view of the above, it behooves those who mean well for Osun to fight this battle as if it is going to be last battle of their lives. With so much at stake to take the state to the Next Level of its development, the time for casting predicaments on primordial sentiments as the oxygen for winning support is over. Like most other states, there is an urgent need for us to face the fact that dear state is currently in a difficult financial situation. Amidst this, the business of government has to run beyond November 27, 2018 when the incumbent chief tenant is expected to vacate office for a new helmsman.

As we know, good leadership is about vision, empathy and passion for governance. But then, the hearts of those who use blackmail as a means of economic survival tell us a great story about how politics is played in this part of the world. This is why the electorate must shine their eyes before falling victim to fringe individualistic promises which have the potential of falling flat on their faces. With the situation of things on ground, coupled with the urgency to make things work better, the electorate must look beyond party affiliations for a successor who has the capacity to inject a clear strategy and unprejudiced accountability to deal with inherent crises as well as focus on development. Such a candidate must be prepared to devote more energy to "unlocking the growth momentum and improved conditions" than Aregbesola's government has done with his mandate.

As we approach this election, we should be concerned with aspirations that have the capacity to trap our future in a darkroom of uncertainty. For instance, it is our duty to ask any candidate who wants to succeed Aregbesola what he or she has to offer, different from what we are currently enjoying in the state. A candidate who makes payment of 'full salary' the pivot of his campaign without telling us how he intends to shore up the state's Internally Generated Revenue will only be insulting our collective intelligence and must be denied the opportunity of over-stretching the texture of our existence. A flagbearer who has shown himself as a rather poor advertisement for academic excellence is only living on borrowed time as he cannot "promote functional education" with a view to eradicating “the frustration of youths caused by education that does not lead to employment.’’

Can carnality be a purveyor of good things? It is futile to think that a candidate with a history of comfortable relationship with violence and integrity deficit can guarantee security of lives and property in a state that has been rated the most peaceful in Nigeria. In like manner, standard bearers who use insipid arguments as magic wands to calm frayed nerves stand the risk of pursuing a course in empire building and self-interest. Given the moral inconsistencies that becloud their ambitions, such souls will find it difficult to rise beyond the confines of sectional barricades and opportunistic tendencies.

Though sentiments and emotions are part of the unwritten ingredients of a democracy that is as teething as ours, the electorate must shun political practitioners whose portion is in the rag of creeping opportunism instead of the toga of respectability. Lest I forget, expired politicians who have overdrawn from the balance of our goodwill with treacherous sycophancy are on a landscape with no moral finishing posts. In my view, such candidates cannot offer "a government totally committed to the good people of Osun.

In politics, every vote counts! Against this backdrop, what then does Osun want? Where is the state headed and who fits the bill? The next governor must be able, capable and ready to spearhead facilities that are fit for purpose. He must be a practical leader who understands governance and how it runs; somebody who knows what creation of wealth is all about and one who is firm in his belief that, as long as we love to run to Abuja for monthly allocations without looking inwards to generate funds, the problem of salary payment will never go away. On the issue of salary arrears owed some categories of workers, experience from other states has shown that workers stand a better chance when they entrust their fate in the hands of 'the devil they know.' Gambling with their future under the shadow of 'the angel they have never seen' will only defeat the beauty of the journey.

The good news is that Aregbesola's administration has laid the foundation for a knowledge-driven economy and has helped a great deal in shaping values through morals. His 'O' Series and Social Protection initiatives have positively impacted the lives of indigenes and residents alike. His passion for functional education and accessible healthcare has been awesome while his radical approach to urban renewal projects remains an authentic source of lessons in performance. The governor's interventions in the Agriculture sector have not only repositioned the state as the food hub of the Southwest, they have also gone a long way in cushioning bitter or biting effects of the economic recession unleashed on Nigeria, courtesy of the cluelessness of the previous administration. And the results have been so astoundingthat, though, Osun is presently reported as among the states with the lowest accruable revenue from the Federation Accounts Allocation Committee (FAAC), it is ranked the 2nd lowest state in Nigeria in underemployment, unemployment and inflation rate. As a matter of fact, it was the 2nd less-miserable and poverty-ridden state in 2017.

May principalities and powers, assigned to rubbish our leaders’ efforts, backfire!