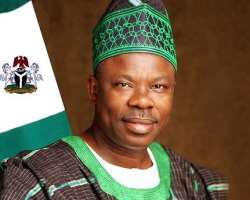 Ogun State Governor, Senator Ibikunle Amosun has been accused of intimidation, insensitivity and anti-democratic tendencies by loyalists of Prince Dapo Abiodun, who is viewed as the leading candidate, among those jostling for the state's governorship position for next year's election.

They were particularly miffed by what they described as the hostility of the outgoing governor to those favourably disposed to the oil magnate's ambition and that he has being doing everything possible to intimidate and cower them into ditching the Ijebu-born prince.

They claimed that Governor Amosun has at various times threatened to deal with those that are in the camp of the former Ogun East Senatorial candidate.

Prince Dapo Abiodun was said to have purchased some rams and other gift items, worth over several millions of Naira to be distributed to party members and executives, for the Sallah celebration, but Governor Amosun, was said to have allegedly barred the party members, especially the state Party Executive, including and especially, the state chairman, Chief Derin Akinbiyi from taking the sallah gifts.

Loyalists of Prince Abiodun, further claimed that the governor's standing order was expressly and sternly issued to the party state Chairman and chairmen of the 20 local governments in the state, adding that Ijebu Prince's intention to run for the governorship seat has been viewed as a major threat by the incumbent governor.

A social media analyst loyal to Dapo Abiodun but simply identified himself as Banjoko said "Ogun State governor Senator Ibikunle Amosun has barred party officials across the state from collecting Sallah gifts from Prince Dapo Abiodun, a gubernatorial aspirant in the State.

"Islam and Christianity encourage well meaning and influential individuals to reach out to people with gift items, during the festive periods, so as to bring happiness and joy to the homes of the people celebrating such festival in their communities.

"In line with his long standing tradition, as a well known philanthropist, Prince Dapo Abiodun has over the years, distributed thousands of rams and other food items, as well as cash to party faithful and others that may not be able to afford the items.

''Just like this year's gesture, this is to enable them enjoy their Sallah celebrations with family and friends despite the prevailing harsh economic conditions.

"The governor, who may have become uncomfortable with Prince Dapo Abiodun's recent political moves, has reportedly issued a directive to

"By this action and some other recent covert moves made against Prince Abiodun by Governor Amosun , one is tempted to believe recent rumours

that tend to paint him as being afraid and threatened by Prince Abiodun's aspiration..

According to informed sources in the political circles in the state, Prince Dapo Abiodun and Governor Ibikunle Amosun, are said to have been inseparable close friends, for more than two decades and a lot of people in the state are wondering why and how the sudden hostility

begin and how the governor can be against the emergence of his bosom friend as his successor.

A top politician in the state, who refused to be named for retributive actions, said that he believes, the governor is actually shopping for a successor that will do his biddings, when he leaves office.

''Everybody knows that Prince Dapo Abiodun is a self-made, successful

man, who will never accept to be pushed around, by anybody. Our governor wants somebody that will do his bidding and he knows, he won't get that in him (Abiodun).

''You can see that Senator Yayi, an experienced politician, with strong ties to Asiwaju Tinubu, has ditched his ambition and has ran back to Lagos. That is what the governor wants. He wants to be the Pharaoh here.

''It is laughable, unrealistic and retrogressive and it is the people of the state, that would bear the consequences of his actions''. he