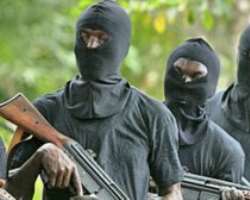 It was gathered that the attackers stormed the area at about 1am and forced their way into the clergyman's apartment, shot him and went away with his wife, Mrs. Talatu H. Akuchi.

As at the time of filing this report, there was no information as to whether the attackers had communicated with the family of their abductee nor demanded for any ransom.

When contacted, the spokesperson of Kaduna State Police Command, DSP Yakubu Sabo, confirmed the incident, saying, the clergyman was shot while struggling with the attackers.

“At the early hours of today, information reached us that some armed men stormed the house of Reverend Hosea and attempted to kidnap him but was shot dead while struggling with them and his wife was taken away.

“It is unfortunate that while we are keeping the peace we are enjoying in Kaduna State, some elements are sabotaging our collective efforts,” he lamented, assuring that the Police will get to the root of the incident.