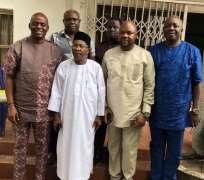 According to Akporeha, "The visits are part of the resolve of this new administration under my humble self to take the Union to the next level and to also appreciate the good works of some of the veterans that had at one time or the other held leadership positions in the Union, we'd never undermine the sense of pride they instilled in the Union which has today made every members to be proud of them. We are indeed delighted to be identified with them. He said.

He however expressed concerns that proximity could not allow him and his team to pay similar visit to other veterans with many indelible achievements in the Union, for example, Chairman House of Representatives Committee on Petroleum Resources Downstream, Hon. (Comrade) Joseph Akinlaja and Hon (Comrade) Peter Akpatason, Chairman House Committee on Civil Societies and Development Partners

who are presently in Abuja.
Akinlaja succeeded Comrade Kokori as General Secretary of NUPENG whilst Akpatason served two terms as President of the Union, both men are today Ranking members of House of Representatives.