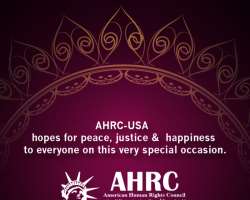 The American Human Rights Council (AHRC-USA) extends its greetings to Muslim Americans and Muslims around the world on Eid Al-Adha, Feast of the Sacrifice.

The four-day Eid starts on Tuesday, August 21, 2018 and ends on Thursday August 24, 2018. Hundreds of thousands of worshippers will conduct special EId prayers in Michigan and around the country.

Eid Al-Adha is one of two major holidays in the Islamic calendar- the other being Eid el Fitr. Al Adha Eid marks the end of the annual Muslim pilgrimage (Hajj) to the holy sites in Mecca and Medina in the Kingdom of Saudi Arabia. Pilgrimage to Mecca, the Hajj, is one of the five pillars of the Islamic faith. AHRC-USA wishes all the Muslim pilgrims a safe and rewarding completion of the pilgrimage/hajj.

"Eid al Adha is the most important holiday in the Islamic calendar, it's a very precious and special occasion. We wish all Muslims a blessed and safe Eid," said Dr. Opada Alzohaili, AHRC Board's President.

"The Eid culminates the pilgrimage, where this year two million Muslims, of all races and nationalities gather in Mecca to perform the pilgrimage, one of the five pillars of Islam," said Imad Hamad, AHRC Executive Director.

"Eid is an occasion to celebrate with friends and family, without forgetting the obligation to help those who are less fortunate in society," said Dr. Saleh Muslah, incoming AHRC board's President.