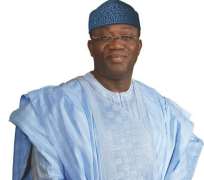 Ekiti State Governor-Elect. Dr Kayode Fayemi, has felicitated with Muslims in the state and in the country at large as they join other faithful around the world to celebrate this year’s Eid-el-Kabir.

Dr Fayemi urged the Muslims Ummah to uphold the lessons of love, loyalty and sacrifice which is the foundation of the festival, during and after the festivities.

The Governor-elect, in a goodwill message signed by his Special Adviser on Media, Mr Yinka Oyebode, said the Eid-el-Kabir festival offers the opportunity for sober reflection and spiritual renewal which Allah demands from the faithful.

He urged the Muslim faithful and adherents of other faiths in the country to make peaceful coexistence their watchword and work together for a more peaceful and prosperous Nigeria.

According to him, Nigerians need to imbibe the lessons of commitment, dedication and obedience to higher authority as demonstrated in Prophet Ibraheem’s willingness to sacrifice his son in deference to the will of God, which Eid-el-Kabir commemorates.

“It is only through the love for one another and commitment to peace, security and stability that the country can progress towards the fulfilment of its great potentials as a nation.”, he said.

He urged Muslims faithful to pray for peace in the country, as they perform the Arafat rites today, noting that the fervent prayers by various religious bodies and individuals have accounted largely for the peace that we enjoy as a nation in recent times.

Fayemi who praised Muslims in Ekiti for rising above religious sentiments that some people attempted to introduce to the politics of the state during the last governorship election, urged them to pray for the success of the in-coming administration that is billed to take off in October.

“I extend warm greetings to the Muslim Ummah in Nigeria as they celebrate Eid-el-Kabir Sallah festival.

“I wish the good people of Ekiti State and Nigeria the joy, peace and blessing of the season.

“Eid-el-Kabir is an occasion to celebrate the love of God. It is a season of charity, making peace and celebration of our common heritage as God’s children.

“As we celebrate, let us remember the poor and the needy in line with God’s injunction to be our brother’s keeper.

“Let us also pray and work for peace and progress of our immediate environment and the country at large. Through this we shall transform into reality, our dream of a better community and a greater nation.” He added.