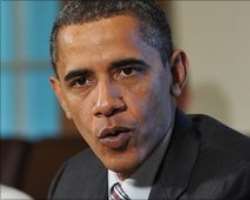 President Obama's comments about the BP oil spill were not “anti-British”, the American ambassador to London has said.

Mr Obama angered many in the UK by referring to the multinational company by its old name of “British Petroleum” when making criticisms.

But ambassador Louis Susman said the president “would have said the same thing” if it had been a US firm.

The Deepwater Horizon rig exploded in the Mexican Gulf on 20 April, killing 11 workers and creating a huge leak.

Mr Obama has said he would have fired BP's top executive Tony Hayward if he were in charge of the company and has supported the idea that it suspend its quarterly dividend for shareholders.

'Catastrophic event'
His comments have provoked anger among many business people and pensioners in the UK, many of whose pension funds have investments in the oil giant.

BP, which has many US, as well as UK, employers and shareholders, has not been known as British Petroleum since 1998.

Mr Susman told BBC One's Andrew Marr Show: “President Obama and the administration would probably have said the same thing if it had been an American company.”

Saying it was not a “diplomatic issue”, he added: “It's an issue that we have a catastrophic event that has not only caused loss of life, loss of all the fisheries in the sea, [and been] economically devastating.

“So, while it might seem a bit undiplomatic in terms of the words, trust me, it had nothing to do with the fact it was British or American. It was the fact it's a problem.”

Mr Susman added: “I think the president potentially spoke that one time where he said British Petroleum and he's very keen to say 'BP' at this point.”

Mr Susman said it had been a “very warm conversation” covering a “multitude” of subjects.

He added: “When the issue of BP came up, they were both agreed. It's an ecological disaster. BP has to do everything possible to stop the leak, accept responsibility and the president made it very clear that he has no intention of trying to hurt the financial viability of BP. That would be the last thing we want”.

He added: “It has nothing to do with anti-British [sentiment].”

He told the Andrew Marr Show: “The US are not seeking to undermine the value of BP. They know full well there are many thousands of people working for BP in the US and they have also got many shareholders, as in the UK.”

Mr Obama's comments had led to angry reactions from some UK politicians.

London Mayor Boris Johnson said there was “something slightly worrying about the anti-British rhetoric that seems to be permeating from America”.

From the business world, Miles Templeman, director general of the Institute of Directors, said some of the language being used by the Obama administration was “inappropriate”.

And Richard Lambert, director of the CBI employers' group, called the rhetoric a “matter of concern”.