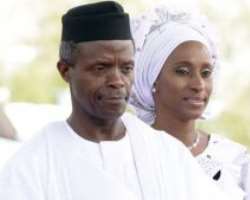 Yemi Osinbajo is basking in the love of many Nigerians at the moment – not a common experience for politicians in this country where they are generally held in low esteem.

The vice-president has been praised for the decisive – and dramatic – actions he has taken while standing in for Muhammadu Buhari during the president's recent 10-day holiday.

The dynamism of the sprightly 61-year-old have been contrasted to the ponderous nature of Mr Buhari, 75, who has been nicknamed “Baba-Go-Slow”.

However, as a southerner he is unlikely to be able to stand in next year's presidential elections, due to the country's tradition of alternating power between the mainly Muslim north and largely Christian south.

'Police torture and killings'
Mr Osinbajo's most recent intervention was to order the overhaul of the police's notorious anti-robbery squad, known as Sars, and ask the country's Human Rights Commission to investigate the numerous allegations of abuses committed by the unit.

For more than a year President Buhari has been under pressure to take action against Sars, as stories were shared on social media about extra-judicial killings, arbitrary arrests, torture and extortion allegedly committed by its officers.

An #EndSars campaign was launched amid calls for the squad to be disbanded.

Mr Osinbajo said he was moved to act because of the “persistent complaints and reports on the activities of the Special Anti-Robbery Squad (Sars) that border on allegations of human rights violation”.

He did not disband the unit but said it would get a new commissioner, be intelligence-driven and its mandate restricted to combating armed robbery and kidnappings.

Members of the squad would also have to wear proper identification while on duty.

Nigerians on Twitter celebrated – and many just seemed relieved to have an efficient politician getting things done.

The previous week, he took the huge step of sacking the controversial head of Nigeria's spy agency after a siege of parliament by men in masks, who turned out to be operatives from the Nigerian equivalent of the FBI.

It was a mysterious affair – and the reasons for the Department of State Security's (DSS) invasion of parliament are still murky, though it is thought to be linked to political machinations ahead of elections next year.

Nonetheless DSS boss Lawal Musa Daura has long been seen as one of the officials denting the government's reputation because of the agency's alleged excesses.

Critics have long wondered why President Buhari, who appointed him, has failed to take action against Mr Daura.

By contrast Mr Osinbajo did not delay. He took the figurative bull by the horns, calling Mr Daura's actions “unacceptable” and “a gross violation of constitutional order, rule of law and all accepted notions of law and order”.

Pulse of public opinion
A former law professor, the vice-president comes across as quiet, unassuming and hardworking.

But he is an eloquent and jovial person, who is usually seen with a smile on his face.

He was the state commissioner of justice in Lagos between 1999 and 2007, where he passed several reforms including a body tasked with protecting citizen's rights.

He was also the pastor in charge of the city's Redeemed Christian Church of God.

He has been vice-president since 2015, when Mr Buhari overcame the odds to defeat the incumbent Goodluck Jonathan.

Last year when Mr Buhari went on medical leave, his deputy took some far-reaching economic measures to prop up the country's currency, the naira.

There was a scarcity of US dollars at the time, which is needed by importers.

So he asked the Central Bank to inject millions of dollars into the market to help stabilise the naira on the foreign-exchange market.

Reviving the economy was one of Mr Buhari's main campaign pledges but he has failed to pass many of the reforms which economists say are needed.

Mr Osinbajo never tries to hog the limelight – and maintains that he does not take any decision without first consulting his boss and getting his approval.

Nevertheless his leadership style is winning him fans as he seems to feel the pulse of public opinion.

Selfish aides
Some suggest one reason for this dexterity is that with fewer powerful aides, he can act independently.

On the other hand, President Buhari, finds it very difficult to punish his erring government officials or make rapid institutional reforms.

Some observers say it is unfair to compare the two – stepping in for a few weeks or even months is just not the same as running a country full time.

Nigeria, Africa's most-populous nation, is a complex place and balancing competing political, ethnic, religious and regional interests in a federal state can be difficult.

While many Nigerians do not doubt Mr Buhari's integrity and ambition to solve the country's myriad problems, they say he is surrounded by selfish aides who do not put the interest of the country first.

The health problems he experienced last year are also believed to have hampered his agility and general performance, although he seems much improved recently.

Despite the criticism of the pace of his decision-making, Mr Buhari has been praised for his dogged fight against corruption, tackling the Boko Haram Islamist insurgency and his attempts to diversify the economy.

Nigeria is only months away from elections – and it has left some wondering what it would be like to have Mr Osinbajo permanently in the top job.

But there is no immediate prospect of this happening – and Mr Osinbajo has never spoken of having presidential ambitions.

Mr Buhari has already indicated his ambition to seek re-election in February – with his loyal deputy once more his running mate and unlikely to challenge him.

There is also Nigeria's informal policy of rotating the presidency – after two terms – between the mainly Muslim north and the largely Christian south to consider.

Mr Buhari, a northerner, is just completing his first term. Mr Osinbajo, a southerner who was born in the mega city of Lagos, would therefore be an unlikely presidential choice for the governing All Progressive Congress (APC) party.

And there is of course, the possibility of an opposition victory which would further remove him from the corridors of power.

While it is unlikely that Mr Osinbajo will be Nigeria's full-time leader any time soon, he is young enough to bide his time until the next poll in 2023, when it might be the turn of a southerner to lead the country.