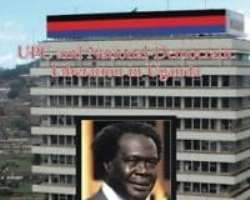 Friends, Classifying anyone as the "successful" at anything tends to reflect more on the source than the subject. So keep that in mind when I make the following statement: Yoga Adhola is a writer whose power to express himself in words mirrored his expressiveness with politics. He is someone who lives and breathes politics. His life is extraordinary not only for the years he has counted but for the people he has known and the scenes he has witnessed. He mentions a lot of people he has rubbed shoulders with in his book, ‘"UPC and national-democratic liberation in Uganda". He touches on a variety of volatile ideas here including the 1971 coup sponsored by the British and Israelites.

In 1962, Yoga joined Kings College Budo School, where he deliberately refused to speak Luganda because he held some anti-Baganda feelings, something that attracted him to the UPC and probably explain why UPC was formed in the first place. In his book, he keeps referring to his ‘hatred’ of the Baganda as Buganda’s social domination over other tribes in Uganda. After his university education at the University of Nairobi, he moved to Tanzania in 1970s that brought him closer to Akena Adoko, Museveni and Obote. Yoga joined Museveni's FRONASA before he switched back to his zone of comfort in UPC, a party he has publicly defended to the teeth up to now. Yoga doesn’t hide his admiration of Obote to the extent that he used Obote’s photo for his front book cover, such that its easy to mistake him to have been the author. I don’t know whether he did that for easy marketing purposes but I found it a bit weird. I also failed to understand how he could see a ‘gesture’ by Obote yet there were just talking on a phone to each other , a week before Obote's death.

In Western culture, virtually everything is understood through the process of storytelling, often to the detriment of reality. When we recount history, we tend to use the life experience of one person-- the "journey" of a particular "hero," in the lingo of the mythologist Joseph Campbell--as a prism for understanding everything else. That inclination works perfectly well when you read Yoga’s book, especially on how Uganda National Congress (UNC) and UPC came to be formed. I also learnt something from the book on this very story which I didn’t know before, that Obote had been elected the president of UNC to replace Ignatius Musazi in 1958 before he eventually allied with the Uganda People’s Union (UPU) to form UPC. What I failed to understand why Obote found it necessary to change the name of the party instead of just recruiting the UPU guys into the party. After all, the original ideas of the ANC were for integration of all Ugandans, and UPU were just a bunch of traders.

Densely written, crammed with extensive endnotes indicative of a PhD thesis, Yoga's book offers no entertainment but there is a lot to learn there. Having seen some of his arguments on the Ugandans At Heart forum (UAH), It took me a long time to finish his book, and I stupidly didn’t give it a first priority. I bought the book in 2016 but I have been reading it in bits. However, I liked the way he describes the Buganda wars against Bunyoro, Busoga and Ankole, e.t.c, and their attempts to try to spread their nationalism, which he called ‘identity chauvinism'.

I had hoped that he would be moved to play a crucial role in the current politics of Uganda, especially considering that he was old enough when we got independence in 1962 and understands a lot of things, but I guess he was put off by the way Museveni does his politics: ‘you're his friend or ally today, but you are an enemy tomorrow if you disagree with him over anything’. As a result, Yoga has joined the vanished worlds of so many wasted resourceful Ugandans abroad, and that is extremely sad.

I will try to share some of the ideas in his book with UAH members whenever I get a chance, God willing.