2019: #Time to remove Mahmood Yakubu as INEC Chairman is now for credible polls and political stability in Nigeria 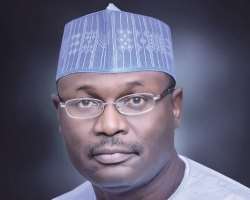 Today it is no news from the existing circumstances that President Muhammadu Buhari does not want to relinquish his hold on power. A man who once said he would be doing one term has suddenly reneged on his promise and fighting tooth and nail for a second term despite all the trademarks of a failed leadership in his administration.

I repeat with this man as INEC chairman, Nigerians should forget any credible presidential poll. This is a man which is distantly related to the President and from inferences, this man can never work against Buhari to give another Buhari's opponent victory.

There is one question I want to ask Nigerians. Have the President and the chairman of Nigeria's electoral commission ever come from the same region and more so a distant relative of the president? The answer is NO!

And from previous elections, since Buhari took charge, there have been large cases of massive electoral frauds calling to mind the recent vote-buying and the like. Votes no longer count in Nigerian elections and Buhari does not seem to see anything wrong with this.

In the recent Ekiti governorship election which was marred huge electoral fraud Buhari was the first person to congratulate the so-called Governor-elect who before the election said the governorship seat will go to the highest bidder with over N10 billion at his disposal which was widely reported by the media.

As luck would have it, money freely changed hands by the two dominant political parties and in the end, Fayemi Kayode was declared the winner by Yakubu Mahmood and his men at INEC instead of outright cancellation of the exercise.

The same thing happened in previous elections in Edo, Ondo and the bye-elections in Bauchi and Katsina states recently.

Nigerians must begin a massive protest against this electoral fraud and the removal of Buhari's distant relative who is the chairman of INEC, Yakubu Mahmood if the supreme wishes of the people will count in the forthcoming general elections particularly the presidential election.

I repeat with all the emphasis at my regal command, Prof Yakubu Mahmood will not conduct a free and fair election that speak the minds of the generality of Nigerians.

As you can see today, the pulse of the people is against the Buhari-led government. Even the blind can feel this and there is no way Buhari will win under a level playing field. This is not possible, in fact by no stretch of the imagination can Buhari win!

The journey to correct another four years of hardship and frustration is now and this is by removing Yakubu Mahmood who has not been able to conduct any fair and free election. I repeat never in Nigeria's political history have the President and the head of the electoral commission come from the region and more so a distant relative of the president in power. No! It has never happened. Under the Buhari-led government, everything is helplessly and marvellously at sixes and sevens!

The previous elections are a litmus test which Yakubu Mahmood have failed. So he has no business to remain in that office in the hope of conducting a credible poll. This is as sure as fate.

If Yakubu Mahmood must remain there, then there is no need for other presidential candidates to throw their hats into the ring to slug it out with Buhari who has failed the integrity tests on all fronts because, with that man there who must have already written the results of the presidential election, it will be a wasted effort, time and money by other candidates. I swear by everything I hold sacred!

With his tacit support of lawlessness, impunity, massive corruption at every level of governance, his administration remains the worst ever in Nigerian political history.

*Iyoha John Darlington, a social activist, political analyst, an expert in conflict management and resolution, a public commentator on national and global issues until recently the international media correspondent of the Green Party of Nigeria (GPN) wrote from Turin, Italy.