Boko Haram of Terrorist and the Book of Harangue of Lyricists - The war within and the attrition in between. 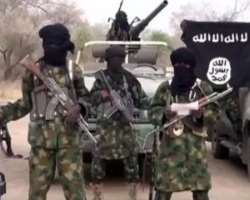 Wars of all sorts have been an integral part of the known and recorded history of Mankind.

Many wars have been fought throughout history, but none so longest running and most indecisive and difficult to date as the war of the Terror Kind!

Almost every country of the world is exposed to the war of the terror kind, and almost all the countries of the world are also affected by it.... Nigeria, not excluded.

There is something like the International War on Terror, an Initiative of The United States of America in the aftermath of the September 11, 2001 Al Qaeda attack on the Twin Towers in New York. The Never-Ending War Against Terror, is 17 years old and has no terminal date yet. The Nigerian version of it, started in 2002 with the founding of Jamā'at Ahl as-Sunnah lid-Da'wah wa'l-Jihād, by Mohammed Yusuf, with a followership of near 15,000 armed men at a time, began full Terror activities in 2009. Today, Boko Haram the inglorious sobriquet of the group, has given way to another name of the Islamic State in West Africa, ISWA, with active Terror operations in Northeastern Nigeria, also active in Chad, Niger, and northern Cameroon.

Since the current insurgency started in 2009, Boko Haram has killed tens of thousands and displaced 2.3 million from their homes and was ranked as the world's deadliest terror group by the Global Terrorism Index in 2015....

That is the grave situation President Muhammadu Buhari and the Chief of Army Staff, Lt General Tukur Yusufu Buratai inherited, when they both assumed offices, in 2015!

Three years down the line and the story is now Different. Very Different!

From the staggering figure of 168 terror attacks on churches and other places of worship between 2012 and 2015, only a small number of suicide bombers in a few mosques of less than 10 have been recorded since then.

From Boko Haram occupation of no less than 14 local governments of 2015, none is at present occupied under the new administration of President Buhari.

From the uncertainty and despair of many years, a relative calm and peace now subsists in troubled parts.

From a Military, disorganized, disorientated, disused and abused, has emerged a truly evolved, knitted, compact, efficient and equipped Military to combat Terror, for the War on Terror is no Conventional War.

In 17 years of fighting Terror, has America, with the greatest army and war fighting machines with the most sophisticated intelligence gathering network all around the world, won the war on Terror.... !?? Yet, Nigeria, under the Present leadership of President Buhari and heads of the Military forces of the Army, Navy and the Air Force, have done very well in the period between 2015 and now to impress beyond the rhetorics of the Book Haranguers... And I will explain.

There is a war without — The Boko Haram war, and there is a war within, the war by the pen-pushers, with their lengthy aggressive writings, fueling their own private wars, within a war. Their fulmination, mostly against the Military are not only insensitive, but subversive. They never see the positives, the great victories... They never report the decisive decimation of Boko Haram terrorists and the capture of their principal commanders, tacticians, IUD experts... They do not see the liberation of thousands of Boko Haram captives... No.

They do not see anything.
They only perceive an opportunity to be subversive, by reporting pockets of Boko Haram resistance, with great imaginations, no facts, no substance, just their own agenda of subterfuge.

They do not also live here, in Nigeria.
Lately, the activities of one Dr Idris Ahmed of the Citizens United for Peace and Stability, (CUPS) resident in the United Kingdom, and that of another, Ahmad Salkida, resident in the United Arab Emirates, have been persistent in calling for the sack of the Chief Of Army Staff and the Military commanders in the Northeast, with further calls for the sacking of the other Service Chiefs..

Ahmad Salkida, particularly, is a controversial journalist with proven links to the Boko Haram terrorist group.

His activities is more of public relations for Abubakar Shekau, the Boko Haram leader.

From his twitter handle and blog, he is in the questionable habit of promoting the activities of Boko Haram Terror, whilst always down playing any success from the Military!

The question for a patriotic mind to demand answers to is this:— What exactly is the rational for promoting terror, publicize your links with Boko Haram, announce your capacity to broker talks with them, yet disparage our military, accuse them of not doing enough, make a lot of baseless and unsubstantiated accusations against the Army and it's leadership, then call for a change of personnel!??

Can a servant serve two masters!???
The meaning of the caption that says, "The Book Harangue of Lyricists", is all about the likes of Dr Idris Ahmed and Ahmad Salkida. And their war within, also explained.

The war on Terror is a war of Maneuver, a war of Intelligence, not necessarily of attrition....

To those like the ones mentioned who have no idea of how a war on terror is fought, they think this is an attrition warfare, where forces attack in an attempt to destroy enemy forces.... Where army Units move to trap and concentrate fire on the enemy.... Where, quantity is the key.... Or, maybe they know this not a war of attrition but are just out to be mischievous.

Whichever way, the hard facts do not support their position.

The facts are as local as they are also safely International.

Also, a lot of civil society groups on advocacy to the Northeastern part of the Country have said that the Military have recorded a successful campaign against the Boko Haram Terror.

An international group also commended the Nigerian military on its professional conduct and the use of rules of engagement in dealing with elements of insurgency.

The group, Global Amnesty Watch (GAW) said the success attained by the Nigerian military against the terrorist also wants the stated successes to be improved upon.

A statement signed by the group's director Cila Roberts said the efforts of our military is commendable, urging the military to immediately curtail the sporadic suicide bomb attacks, the last resort of a badly degraded Boko Haram, to ensure a closure, calling on the authorities with the active support of citizens to ensure that terrorists have no chance of regrouping to again torment the population. It is also pertinent to say, it is only now that many hitherto displaced refuges have started going back to their original homes and habitats.

With all of these local and international out pour of accolades, one then wonders, why the war from within from the Book Harangue of Lyricists of the type already mentioned in denigrating the superb efforts of our military..

Why should we change our wining team, when we are wining this war!??

Who changes a wining team, when the war is about to be won!?

Perhaps, all of us stakeholders in the enterprise of a Terror-Free Nigerian All Inclusive Venture, should devote our time and energy into evolving an exit strategy for both the Military and the discapacitated terrorists, in a post terror situation...

We all should be looking at the right instruments of law, involving the Attorney General of the Federation and Minister of Justice and the Department of State Services in assuring the commanders of the sect of their safety should they surrender and down their arms.

We should also be looking at formulating a hybrid justice system that affords Nigerian troops the capacity to address security threats posed to the nation's sovereignty without running foul of international conventions henceforth...

These are the issues that are paramount at these times on the war on Terror regarding the Boko Haram, bringing it to a successful closure, without the distraction of those subversive elements whose intent might actually be to fuel the continued aggression of Terror, perhaps for their personal gains, so that our gallant security forces can then focus on providing solutions to our other pressing security challenges of the herdsmen, kidnappers and the likes..

Comrade Oladimeji Odeyemi, a security analyst and a counter terrorist expert is the Convener of the Coalition of Civil Society Groups Against Terrorism in Nigeria contributed this article from Ibadan, Oyo State.