Not In My Country decries A Return To Decree 4; Demands Samuel Ogundipe's Immediate Release! 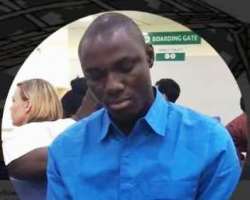 We at the Akin Fadeyi Foundation [AFF], conveners of the inter-sectoral campaign against corruption in Nigeria – CORRUPTION NOT IN MY COUNTRY are alarmed and outraged over the arrest and detention of Mr. Samuel Ogundipe on the orders of the Nigeria Police. This was after the Editor in Chief, Musikilu Mojeed and the Education reporter, Azeezat Adedigba who turned themselves in voluntarily on invitation were reportedly harassed and manhandled.

This rising attack is not just appalling, it signals a disturbing and gory descent back into the abyss of the better forgotten and horrifying days of Decree 4, where the muzzling of press freedom characterized the regime of former Head of State, General Muhanmodu Buhari. It is a sad irony indeed that the same General Buhari, a beneficiary of freedom of expression under democracy through which he became a civilian President has returned to running a repressive government through a security apparatus that is becoming increasingly rascally.

The detention of Mr. Samuel Ogundipe now is regrettable, reckless, unlawful and makes a huge mockery of a government that has just announced a planned policy reform of the same Police institution. It is equally laughable that a supposed law enforcement institution which is expected to be informed and versed in the doctrinal tenets of the media profession regarding confidentiality is demanding and pressurizing Samuel Ogundipe, a reporter to divulge the source of information over a story published by the newspaper, and several newspapers on a correspondence between the Inspector General of Police and the Vice President. We expected the police to know better, pick a learning from Samuel's bold exposure and therefore, fine-tune its internal processes for better outputs in subsequent outings.

Also, this bare-fang attack on Premium Times is a clear demonstration of ignorance of every letter in the Nigerian Freedom of Information Act signed into Law on May 28, 2011. This is the Law which binds the Nigerian government, this is the Law which showcases our nation as positioning for global best practices, it is not a Law for the proponents of Hobbesian theory of anarchy and lawlessness who thrive on attacking the fourth estate of the realm. It is on the premise of this Law that we demand the immediate and unconditional release of Samuel Ogundipe, arguably, one of the finest and most decent investigative reporters to come out of this nation. Section 16, Sub section C grants Samuel the Privilege of Journalism Confidentiality. To demand for the contrary is brutal, uncivilized and cannot find a space in the society we seek to build.

May we nudge the ears of this government that the continued detention of Samuel Ogundipe and other uncompromising pen-pushers indicate that the planned reform of SARS is a sheer political campaign gimmick to hoodwink the Nigerian electorates into returning this government to power in 2019.