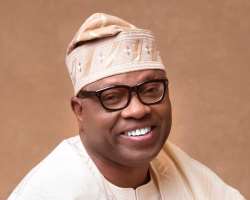 The Secretary to the Oyo State Government, Alhaji Ismail Olalekan Alli might have concluded arrangements to declare his intention to succeed Governor Abiola Ajimobi.

A top politician in the state told The Nigeria Voice that not less than 11 members of Ajimobi's cabinet are eyeing governorship seat and Alli is highly favoured amongst the power players in the state.

According to the source, “This is a huge one because Alli is seen as a silent achiever by many. His humility as reflected in his writing of this letter to us as individuals coupled with his obviously vast experience in public and private sector management makes him an attractive option for the State. “

“ I can confirm to you that the mood in several quarters has been one of optimists and euphoria upon receipt of this letter. Alli is a consummate politician and we all look forward to working with him to build on the legacy of the current government and move the State to even greater heights”.

In one of the smartest moves employed by politicians in recent times, the SSG took in a notch higher in seeking support for his aspiration.

Findings revealed that Alli wrote exclusively to top government functionaries in Oyo State to inform them of his decision to run for the Governorship seat.

Sources told this medium under anonymity that the letters which were hand delivered and personally addressed to all political appointees, elected officers party executives and stakeholders in the state including the Governor, encapsulated the relationship Alli has had with each individual in the cabinet in the last 5 years of assuming office.

The SSG was said to have in the content of the letters described how meritorious their service to the people of Oyo State had been with the resolve that the progress achieved will be sustained if he is supported to be Governor.

The development the sources revealed was ecstatic as it took many by surprise. The gale of endorsements and support for Alhaji Olalekan Alli has continued to pour in since then.

The sources told The Nigerian Voice that the SSG will publicly declare his interest in a ceremony on Tuesday.