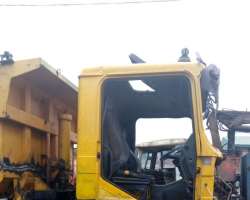 The Ogun State Police Command has arrested an ex-convict, Yisa Nwachukwu for allegedly stealing a man diesel truck belonging to one Alhaji Owonifaari which he sold for four hundred thousand naira.

He was arrested along with one Yusuf Sanusi following an information received by the Divisional Police Officer of Onipanu Division, Mr Sangobiyi Johnson.

The Police Public Relations Officer for the command, Abimbola Oyeyemi told The Nigerian Voice that the suspects were apprehended as a result of the promptness of the policemen.

According to him, "the police got the information that a Man Diesel truck was brought to Ojolowo sawmill in Ota where the truck was being dismantled into pieces in order to sell it in parts."

"On receiving the information, the DPO onipanu led his detectives to the scene where Yisa Nwachukwu who had been earlier arrested for stealing a Bajaj motorcycle, charged to court and convicted was again arrested together with his receiver, Yusuf Sanusi."

"On interrogation, Yisa Nwachukwu admitted that he was employed as a driver by the owner of the truck and when he was not paid his salary, he decided to abscond with the truck. He stated further that on his way to Nsuka in Enugu state, the truck developed mechanical fault and since he has no money to fix it, he called the receiver, Yusuf Sanusi who met him at Ore in Ondo state where the truck was towed to Ota after selling it to the receiver at the rate of N400,000."

The PPRO said another Gulf Bus with registration number FKJ 932 XS belonging to one Kingsley Unaka which was also stolen by Yisa Nwachukwu was recovered at the same location.

The commissioner of Police in the state, CP Ahmed Iliyasu who commended his men for a job well-done advised members of the public to always have a background check on whoever they want to employ so as not to have an armed robber as a staff.