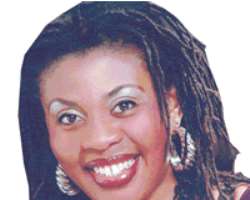 Lillian Dizo
Lilian Dizo had her first taste of acting as an undergraduate back in 1996. In the course of time she has worked with some of the best producers in the country and is now enjoying the limelight in Nollywood. Both as a person and as an actress, one of Lilian's strengths is the intimate, affectionate relationship she enjoys with her husband, Victor. Blessed with three children, the lady who wears trademark dreadlocks strongly believes that the challenges of childbearing, especially in situations of delayed conception should not tear a couple apart, as she reveals in this interview. Excerpts…

Who should take responsibility for infertility?
When a couple have stayed for some years without an issue, it is the responsibility of the two of them to realize that first, a child comes from above, and there is no point to apportion blames as to who is responsible for the delay.

The couple should put heads together to look for solutions medically and spiritually. Of course in that kind of situation it is the woman who is usually hell-bent on getting to the bottom of the problem. The man should throw more weight on the side of the wife. He should go with her for the medical tests. Now, it is a two way-thing – there is no way one is treated and the other is left out especially since they are a couple. So if a woman is subjected to those medical tests, the man should also allow himself to undergo the same fertility tests.

But the case is usually that the man believes that he is not responsible and decides not to take tests. Do you think this is appropriate?

In most cases, they say it is the woman. That is not true. I have learnt that most major cases show men being responsible. Believing they are perfect, they go about trying out several different concubines and get deeply involved in extra-marital affairs. Women naturally are hardly unfaithful after marriage. Men should be able to come down from their high horse and go for treatment if they actually want to have child.

What do you say about some men who don't stay with their wives during labour?

I don't think this is right. From day one, if a woman is pregnant, the man should understand that she needs support. I am not saying a man should start following her everywhere but I believe that wives as they are always come back to give reports and the men should give her the time to listen and be carried along. If you claim you love her, labour is a period in which you must prove it by standing by. If he is beside her, he gives her the mind to push on, that she can make it. 'Sorry, you can make it, sorry you can make it' is enough encouragement. Most men who have done this have been able to learn how to pamper their wives, how to appreciate them and of course, love and respect them. It solidifies marital relationships, love and affection.difies love and marriage

Can you give us an insight of your own experience?

I will say from day one, my husband supported me until I had my baby. He was there in the hospital. I overlooked whosoever that was around me and had only him in my focus. He really gave me a mind of my own that I could make it. Although he was not right in the labour room, he was right there and we were communicating. I had my phone so we were talking on the phone. I could see him through the window. We kept praying and he kept telling me, 'honey you can make it, I know you can. be strong'. That gave a lot of inner strenght, so much that I didn't feel pain anymore. I kept telling myself I could do it.

Do you think its silly for a man to accompany his wife to the market to buy baby things during pregnancy?

Although my husband did not go along with me to shop he was aware of everything we needed. I went through scan and found out the sex of the baby. So it was not confusing what to get.We made the list together and he gave me money. Although he did not go with me to the marke that never meant he was not there. Whenever I bought things we analyzed them together. It was really a lot of fun doing this together.

Some men would say, 'This woman is too frivolous'
Some men are difficult and would want to think it is stupid and not masculine to go to market with your wife. Such men do not have respect fro their wives. They think that once a woman is pregnant she is on her own. It can never be good for any marriage.

Marriage is not meant to be managed. It is a beautiful thing ordained by God and should be nurtured, pampered. If you have ever had a relationship like first love, before marriage, you know how it feels, what it means. Marriage is a higher level of first love. You may have dabbled into a relationship but right now, this is your own forever. It should be pampered and be more appreciated more than whatever you had before you got into that relationship. It should be massaged, cherished everyday.