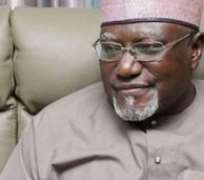 The Presidency Wednesday said that the sacked Director General of the Department of State Services, DSS, Lawal Daura will remain under house arrest.

A presidency ‎source that spoke on condition of anonymity said that shortly after the dismissal of the former DSS boss by the Acting President Yemi Osinbajo on Tuesday, he (Daura) was arrested right inside the presidential Villa, by men of the Nigerian Police Force.

The source also confirmed that Mr Daura was presently being detained in one of the presidential guest houses at Aso Rock. He said, “He will remain there until several investigations over certain issues bordering on him are concluded.” It was reliably gathered that when the sacked DSS DG finished his meeting with Osinbajo on Tuesday after the siege to the National Assembly, he did not follow the normal exit route rather he was secretly whisked away from the Acting President's office by police officers even without the knowledge of his aides that came with him.

Besides being one of the favourite appointees of President Muhammad Buhari, the sacked DSS boss was accused to have carried out different controversial actions which the government believed were painting it in bad light.

Among such actions were the raid in October on the homes of judges accused of corruption, who were later not found guilty and the damaging report against the confirmation of the EFCC boss. Since Daura was booted out, the Acting Chairman of Economic Financial and Crimes Commission, EFCC, Ibrahim Magu has been meeting with the Acting President.