Borno Youths, Students Urge Senator Ndume to Step Down For Sanda,Contest For Governorship in 2019 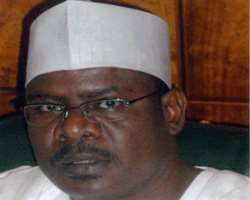 Borno Youths and Students Discussion Forum has called on Senator Ali Ndume, senator representing Borno South Senatorial district to step aside for Garba Sanda, an APC Senatorial aspirant having represented the zone at the House of Representatives and senate twice respectively.

The forum also urged Senator Ndume to rather contest for the governorship of Borno State in 2019 election instead of returning to the senate for the third time, stressing that, it was right time for someone different to represent southern Borno at the senate in 2019.

The Spokesman of the Forum Comrade Mohammed Hassan who stated this Wednesday at a press briefing with journalists held at the Correspondents Chapel of NUJ office Maiduguri further said that Garba Sanda deserved to be the senator to repesent the Borno south at the national l assembly having sponsored some students from the zone to tertiary institutions and provided and facilitated employment and job opportunities to many graduates from the zone with various organizations.

He said the students and few youths from the zone have agreed to mobilize people to vote for Garba Sanda to replace Senator Ndume who has served four times at the national assembly.

According to him, the forum covers the entire Borno state and was established 8 months ago with a mission to effect changes on past and old politicians and allow new breed politicians to take over the leadership and representation of the zone.

He noted that Sanda has offered scholarships and employment to lots of graduates and now uniting the southern Borno people towards enjoying power shift which he said it was a welcome development with passion, confidence and unity it could be achieved in 2019.

Mohammed further lamented that senator Ndume only drilled boreholes in some selected areas within the zone and distributed poverty alleviation materials and equipments including cash distribution to old age and women as youths and women empowerment but not enough while stating that Sanda has offered scholarships to many helpless students and facilitated employment for some graduates from the zone.

He however confessed that Garba Sanda sponsored the press briefing and plans were under way to reach out to other stakeholders in the zone and other parts of the state on the need for change and replacement of old hands at the national assembly.

The Student Leader also said the forum was out to create awareness among the the youths and students who formed 75% of the voting age group after consultation and discussions with other stakeholders considering the prevailing situation in the zone.

Meanwhile, in a swift reaction, Senator Mohammed Ali Ndume in a phone conservation with journalists Wednesday said," I welcome the development that Sanda has shown interest to contest for senatorship of our zone. I am not worried about his aspiration. I was elected by the people of southern Borno including the students."