AHRC urges all citizens to vote this Tuesday, August 7, 2018: 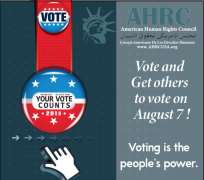 The Michigan's primary elections are tomorrow and the American Human Rights Council (AHRC-USA) urges all citizens to turn out to vote. Voting polls open at 7:00 AM and close at 8:00 PM.

Voting smart and casting an informed vote is key. The American Human Rights Council (AHRC-USA) urges all voters to vote for candidates that reflect their values and their vision for the state and the country.

So many of us do not realize that the outcome of these upcoming primary elections could be the final results of the November general elections by default. Unfortunately, many realize such reality too late. This is why people should take voting very seriously as many elections are decided by the narrowest of margins.

Voting is the people's power. Giving up such power will weaken our ability to make a difference and render the change that serves our interests and address our concerns as citizens. Active participation in elections will help shape the future of our state and our nation. Those who are registered to vote should not only vote, but should get others to vote breaking the routine that causes low turnouts and low participation.

It is the responsibility of each of us to overcome the low turnout rate in elections especially in the primaries by voting and making sure others vote as well. Voting is a civic duty and the right to vote is a precious right. If you don't vote, you are not part of the democratic process.

These are extraordinary political times. And this primary has promising candidates that offer different visions for the state and the country. We should spare no effort in seeing that the best people are elected. We urge all citizens who are registered and eligible to vote in Michigan to make their voices heard this Tuesday, August 7, 2018.

"In a democracy, voting makes all the difference in the world," said Imad Hamad, AHRC Executive Director. "Given the lineup of candidates we have, indeed the eyes of the world are on Michigan," added Hamad. "We urge all citizens to turn out to vote and to make sure their friends, neighbors and family members vote as well," concluded Hamad.