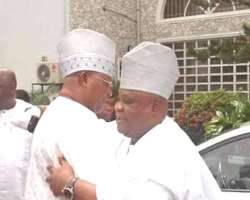 The principal was arrested over his role in the alleged forged testimonial and the matter is under investigation. But Senator Adeleke said he truly attended the school and faulted the arrest of the principal by the policemen from Alagbon.

In a press statement signed by the Director of Media and Publicity of the Senator Ademola Adeleke Campaign Organization, Mallam Olawale Rasheed and made available to The Nigerian Voice in Osogbo, the PDP candidate described the arrest of the principal as "unwarranted politicization of a routine school administrative process".

According to the statement, "We are constrained to issue this statement on the recent arrest and persecution of the Principal of Ede Muslim High School over false accusations of forged school Testimonial issued to Senator Ademola Adeleke as a former student of the school because of a date error."

"We note with great alarm the politically motivated arrest and unwarranted media attacks designed as a tool of harassment, persecution and character assassination of the PDP flag bearer; Senator Ademola Nurudeen Adeleke."

"It is insane to continue to peddle falsehood questioning Senator Adeleke's attendance of Ede Muslim Grammar School (Now Ede Muslim High School), where he was very popular and well known for his amiable and friendly character, always drawing people close and seeking their cheerfulness and joy, a fact his school mates and alumni members attested to. He was in fact the President of the Old students association until recently."

"We note with great concern the ridiculous criminalising of a simple issuance of School Testimonial to a former student. The politicization of a routine school administrative process is hereby condemned in its strictest terms and we call the Police authorities to please call their men to order and redirect their attention and efforts to investigating and solving real crimes and not trumped up accusations."

"It must be reaffirmed that issuance of a testimonial duly signed by authorities of the school to an ex student cannot be a crime irrespective of the date on it. There is clearly more to this exercise than routine investigation. How can a date issue on a Testimonial and not a Certificate be a matter that attracts the attention of FCIB Alagbon officers from Lagos?"