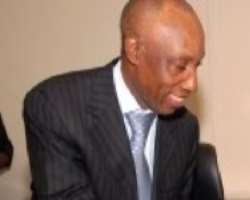 ABUJA, June 12, (THEWILL) - Former Group Managing Director of the Nigerian National Petroleum Corporation and Chairman of Brass Liquefied Natural Gas Limited, Dr. Jackson Gauis-Obaseki, has described the present crop of Management of the NNPC headed by Engr. Austen Oniwonã€€as a competent and crack team that could reposition the oil and gas industry for the benefit of all Nigerians.
Dr. Obaseki stated this when he paid a courtesy visit to the Group Managing Director at the NNPC towers, Abuja on Friday. ã€€

He said the management team has the requisite expertise and integrity that could help the Federal Government achieve its aspiration of transforming the Petroleum Sector into an efficient industry.

"The NNPC management team is a good team and I urge them to work together as one. I say this because leadership comes from God and there is always a reason why leaders are selected at any particular time," Dr. Obaseki quipped.

He commended the President, Dr. Goodluck Ebele Jonathan and the Minister of Petroleum Resources, Mrs. Diezani Alison-Madueke for appointing Engr. Oniwon as GMD and expressed optimism that he would justify the confidence reposed in him.

Speaking on the Brass LNG, Dr. Obaseki described the project as an enviable undertaking which could helpã€€create employment for over 15, 000 youths in the Niger Delta in line with the cardinal objective of the Federal Government post-amnesty programme. He stated that such a feat would go a long way in mitigating vices in the country.

In a statement made available to THEWILL in Abuja, the former NNPC boss described the Petroleum Industry Bill currently before the National Assembly as a veritable instrument that would remove the NNPC from the apron string of Government and allow it to transform into an integrated national oil and gas company.

The former GMD urged the new Management of the Corporation to be selfless and put national interest above every other pecuniary consideration, noting that for them to succeed, there was every need for all staff and management to cooperate with the leadership of the Corporation.

Earlier, the GMD, Engr. Oniwon thanked Dr. Obaseki for the visit and informed that the present oil and gas industry is operating in a dynamic environment, adding that the present management under his watch is determined to re-establish the integrity of the Corporation and bequeath an indelible legacy for the next generation.