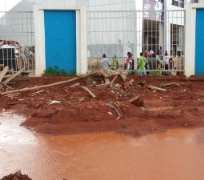 Less than 24 hours to the end of the ongoing African Senior Athletics Championship Competitions holding at the popular Stephen Keshi Stadium Asaba, Delta State, with alleged substandard materials, angry reactions from participating countries, Deltans and spectators have continued to rent the air.

Our respondents who pleaded anonymity bereted state governor, Ifeanyi Okowa over the rush the stadium received in order for an international event of this magnitude to be held, coupled with the fact that major work are yet to be done.

The allegation that the stadium project was turned into political campaign by the state governor hence he embarked on the construction was to woo indigenes of Asaba, to massively cast their votes for him come 2019 governorship race, may not be totally false.

While some alleged that the Keshi’s Stadium may have been turned into a bandwagon for political interest, others revealed that it is also an alleged conduit pipe to rake monies into cronies private accounts.

It was reliably gathered that the contract which ran into billions of naira to Solomon Ogba who doubles as the chairman, Local Organizing Committee (LOC) and old Athletics Federation of Nigeria (AFN) President has not been commissioned before it was used for the event.

The failure to complete the stadium especially the floodlight, which resulted into the kick-off of the event under the scourging sun instead of the evenings, the erection of uncompleted irons and rods (scoreboard) and a finishing touch on the stadium to international standard, a situation which has been widely condemned.

It gathered that the first tranche of allocation released for the commencement of the stadium at the early stage was allegedly diverted by Ogba and chairman of the Sports Commission who doubles as the LOC Vice chairman and younger brother to the state governoor, Tony Okowa, before the last minute release which resulted to poor organization.

It is a known fact that internal journalists were relegated to the base by the medi team to the LOC, led by Head of media and Publicity Olukayode Thomas, subjected reporters in the state and across to strenuous registration exercises as some newsmen were still being registered today Saturday 4th August 2018 when the event comes to an end Sunday 5th August.

A journalist (name withheld) told The Nigerian Voice Thursday that he drew the attention of Thomas to one of the bad toilet which was gushing water into the entire rest room.

Another journalist Tonychuks Owunebe posted on his Facebook page on 2nd August saying “ASAB CAA: A huge show of shame!! The Senior Amatuer Athletics Championships CAA 2018 taking place in Asaba, showcasing huge failures as continuous logistics issues and incompetence on the part of LOC mare smooth competition in athletes. Delta State to me has failed Nigeria. So many ugly events emanating from the ongoing championship explains the fact that some poeple somewhere are out to disgrace Nigeria in Asaba. This is a huge show of shame”.

A security agent stationed at the front of the stadium also observed that the preparation for the event was shoddy as the premises are also nothing to write home about.

It would be recalled that following the poor manner the event was packaged despite the huge sums released, the opening ceremony and other sports which were scheduled to hold by 2:00pm on that very Wednesday were shifted.

Meanwhile, Former governors of the state, Mr. James Ibori and Mr. Emmanuel Uduaghan were conspicuously absent from the event which government house sources attributed to the poor and shameful manner the international event was organized.