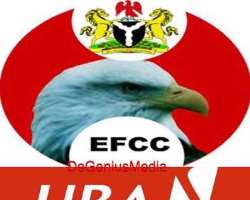 Gbadegun Abiodun, Oladipo Oladapo and Afolabi Albert were arraigned before Justice Chuka Obiozor on five counts of conspiracy to receive millions of naira in cash without going through a financial institution.

EFCC said the three, on March 30, 2015, conspired to accept cash payment of N177.3 million without going through a financial institution.

The commission said the offence of accepting cash payment exceeding N5 million violates Section 18 and is punishable under Section 16 (2) of the Money Laundering (Prohibition) Act 2011 as amended by the Act No 2, 2012.

Abiodun, Oladapo and others at large were said to have used N22 million in April 2015, which they allegedly obtained through forgery, thereby violating Section 15 (2) (d) of the Money Laundering Act.

In Count Four, EFCC said Oladapo and others at large took possession of N3 million in cash from Abiodun, when he “reasonably ought to have known that the said N3 million was proceed of your unlawful activity to wit: bribery.”

The prosecution further alleged that Oladapo and the others who are unnamed also took possession of N10 million through the United Bank for Africa (UBA) account of Bacole Multiconcerns Universal Limited operated by him.

EFCC, through its prosecuting counsel, Mr. Ekene Iheanacho and G. C. Akaogu said Oladapo reasonably ought to have known that the money was paid as bribe.

The alleged offence violated Section 18 (c) and punishable under Section 15 (3) of the Money Laundering Act.

The defendants, said to be attached to INEC in Osun State, pleaded not guilty to each of the counts.

Defence counsel Dapo Esan pleaded that they be remanded in EFCC custody pending hearing of their bail application.

He said they were well-treated by EFCC officials while in the commission’s custody.

But Iheanacho said the facility was overstretched, adding that only those being investigated were kept in EFCC custody.

Justice Obiozor ordered that the defendants be remanded in Ikoyi prison.

He adjourned until August 7.