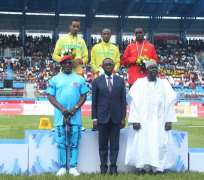 Although, the 21st Senior African Athletics Championship Competition has commenced, the Stephen Keshi’s stadium, the venue for the event remains uncompleted.

The Nigerian Voice correspondent at the stadium for the event, reports that the scoreboard, flood light, among other facilities have not been put in place by the contractor handling the project.

The development created doubt in the minds of sports lovers; particularly by some participating countries expressed fear over the smooth take off of the event.

Some participants who spoke to our correspondent expressed dismay over the level of work done at the stadium and the poor preparation towards the championship especially on the part the Local Organizing Committee (LOC), chaired by Solomon Ogba.

According to them, “The event did not come by surprise or by eventuality or by compulsion rather it was planned for about a year, yet the stadium is not ready for the competition”, describing the stadium environment as an eyesore

But Ogba, in his world press briefing told journalists that work is still going on at the stadium, assuring visitors that by Wednesday August 1, the stadium would be hundred percent ready.

Meanwhile, Athletes participating in the competition, it was gathered are allegedly stranded in Murtala International Airport, Lagos State and the Asaba degraded airport.

Findings revealed that some of the Athletes who were allegedly stranded in Lagos airport for three days just arrived the Asaba airport this morning especially Athletes from Kenya, Errtrea, Egypt, Cameroon, Sierra Leone, South Sudan among others all arrived on Wednesday..

It was also gathered that some Athletes could not access the Asaba airport as a result of alleged poor services as only small aircrafts uses it twice a week.

The situation, a sports enthusiast who did not want his name on print described as failure on the part of the LOC chairman, Ogba, “The inability of the LOC not to provide adequate logistic for the Athletes is worrisome after huge amount of money have been earmarked by the government”, he said.

Corroborating our correspondent’s findings in a statement issued in Asaba by the head of the media of LOC, Mr Thomos Olukayode said “Due to some organizing problems it was decided to cancel Day one (1) of the competitions programme for round one (1) of the 100m events, Men and Women and the 10000m Men final event”.

Thomas, in a statement said, “The last set of expected athletes at the 21st African Championships have all arrived in Asaba ahead of Wednesday’s Opening Ceremony. Leading in the last set of athletes to the Delta State Capital was former World Champion in the Javelin Event, Julius Yego”, he added.

According to the President whose address was read by the Minister of Sports and Youths Development, Mr Solomon Dalung said, “Sports has become a veritable vehicle for friendship and building relationship among African nation”.

“If Africa must excel in sports, private bodies must be involved in the sponsorship of sports championship," the President said and thanked Governor Okowa, the government and people of Delta State for hosting the championship on behalf of the country.

The President urged the governor to keep the flag flying as his good works were highly appreciated.

Governor Okowa in a brief speech, thanked God that 52 African countries were in Asaba for the championship, stating, “I welcome all of you to Asaba and it is my prayer that you enjoy your 5-day stay. Championship of this nature is vital in building friendship”.

“It is a thing of joy that we have provided a befitting stadium for the championship, enjoy your stay in Asaba”, the governor asserted.

Lord Coe had commended Governor Okowa for providing a befitting venue for the championship, stating that the Stephen Keshi Stadium "is a legacy for generations to come."

President of Confederation of African Athletics, Mr Hamad Malboum also, thanked Okowa for providing venue for the championship and urged athletes and officials participating in the events to respect the rules of the game.

First Gold medal was won Wednesday at the championship by an Ethiopian, Jamal Mekonnen in the 10, 000 metres race.