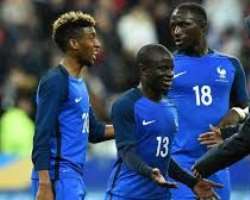 Chelsea have offered  a contract extension worth “nearly” £290,000 a week to N'Golo Kanté , according to Gary Jacob in an exclusive for The Times. The new contract, which would tie Kanté to Chelsea for another five years, would more than double his current wages and make him the highest paid player in club history.

Nothing less would be deserved.
Although wage information is not made public in football (unlike in most other professional sports ), we have it on good authority that Eden Hazard and Cesc Fabregas are currently Chelsea's two highest paid players, with both around £200,000 per week. Hazard is in line to increase that to at least Kanté levels and possibly into the 300s, should he (finally) sign his contract extension, but that unfortunately is still far from a certainty despite the Real Madrid rumors getting shelved for the time being.

While Hazard is at the ideal time for a contract extension, with two years left to run on his current deal, Kanté is actually ahead of schedule. His current contract has three years left and normally a new deal would not be offered until next year. But these are special circumstances.

For one thing, if Kanté isn't Chelsea's best player then he's a close second to Eden. It's right that his wages reflect his status. For another thing, something that's imparting urgency to the matter, is that Kanté is being pursued across Europe, PSG being his most ardent suitor.