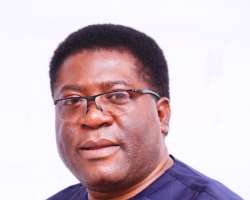 In disobedience to the restraining order against the the Chief Judge, the 7 man panel, Speaker and members of Imo State House of Assembly from further action on the controversial impeachment proceeding against the Deputy Governor of Imo State, Prince Eze Madumere, the House of Assembly in Gestapo manner, has purportedly removed the Deputy Governor of the state from office.

The Presiding Judge of High Court 8, Justice Benjamin Iheka had restrained the 7 man panel of Inquiry, constituted by the Chief Judge, Hon. Justice Paschal Nnadi, the Chief Judge, Speaker and members of Imo State House of Assembly over a matter brought before the court that bothers on constitutional breaches in the procedure adpted to remove the Deputy Governor from the office.

The Acho Ihim led faction of the members of the House sponsored by Governor Okorocha this evening against the Court Order and the rule of law illegally removed the Deputy Governor in a kangaroo manner.

Against the requirement of the law, Prince Madumere was not given fair hearing as he was neither invited during the sitting of the investigative committee in the House of Assembly nor by the seven man panel set up by the Chief Judge.

It will be recalled that Prince Madumere through his Counsel, Chief Ken Njemanze (SAN) had served the Chief Judge, Speaker and members of Imo State House of Assembly coupled with the members of the 7 man panel over a breach in the service of notice of Gross Misconduct and other illegality, even as the Deputy Governor was not mandatorily served as required by law.

The report has it that the 7 man pannel of inquiry never sat for one day as no location where they sat in the court premises was mentioned; even as the Deputy Governor and other parties to the impeachment procedure were never summoned, thereby stalling room for fair hearing.

This development in the State has drawn an outrage as cross section of Imolites are reacting, describing Imo State House of Assembly as mere rubber stamps who have become willing tools in the hands of Okorocha who does not obey court orders.

According to Barr. Ikechukwu Nwaopara, he described the action of the lawmakers as legislative rascality, which cannot stand the test of time having been restrained by the court of competent jurisdiction. He therefore called on the people of the State to remain calm since the matter is already before the court, assuring that justice will prevail.

Reacting to the development, Engr. Okey Njoku, an oil worker, called for quick recall of the lawmakers that participated in what he described as Kangaroo removal of the Deputy Governor from the office, assuring that Okorocha and his co travellers have met their Waterloo with the illegality of their action.

Nze Stanley Onuoha, an All Progressives Congress Chieftain, described the illegal removal of the Deputy Governor of Imo State as subjudiced since the matter had been restrained by the court of competent jurisdiction. He also took a swipe at Imo lawmakers, described them as mere bench warmers. He further opined that Imo State has been made a laughing stock for disobedience of rule of law.