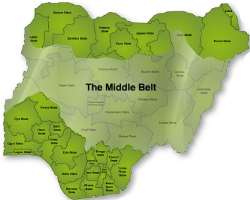 I read through the recent middle belt declarations today and I have the following reactions concerning their demand for 8 Regions or zones as federating units for the new Nigeria.

The problem with this beautiful declaration is that like others from East, South West and South South is that it hangs in the air. There is no legal basis for a part of Nigeria to make such a declaration except in law. The only law truly existing in Nigeria is the one that made Nigeria independent of colonial British rule. This law prescribes 3 regions as Federating units.This is the structure that bears the name Nigeria.The Only constitution made by the people was the 1963 constitution. It was never abrogated even by military rule only parts of it were suspended. What was suspended will eventually return when emergency situation ends. So let us suppose the emergency has ended in Nigeria you can only make progress when you restore the parts suspended. Whatever changes you make or propose on this half constitution cannot stand and will be indefensible and indeed hangs on air

That is what is happening to the 1979 and1999 constitutions as well as the reports of the 2014 efforts. They can only be used for temporary political advantages but not lasting. That is why the 6 geo political zones cannot be Federating units. So is the States and local government areas. They are not defensible in law. What can happen is the return to the old Regions first. Just where we stopped in 1964 when the legislature wrongly decided to tamper with the Tripod structure by creating the Midwest. So we return power symbolically to the rump of Balewa legislature from whom Late Ironsi took power formally. This happens after the declaration that Law and order has returned to Nigeria after the civil war. This was not done and therefore all military decrees and acts of national Assemblies subsequent before this declaration cannot stand in law and are null and void.

Only when the 1963 constitution is activated as the only structure legally binding on the Nigerian State can we begin to address the problem of the minorities maybe through State or provincial demacations. Every new zone must conform to the three original regions to stand on its feet not not on air as we have today. What we need most is the determination to do the right thing and not to seek for national solution trying to solve the same symptoms that were created by the mistakes of the past. If you seek for debates today most people will think it is a platform for sectional struggle. Get the root problem solved first before legally attempting to solve sectional challenges that is my take.