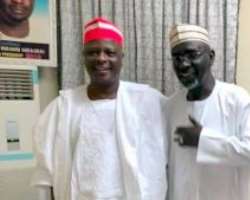 In what appears to be an unprecedented twist in the politics of Kano State, two former governors and erstwhile political archrivals in the state, Senator Rabiu Kwankwaso and Malam Ibrahim Shekarau, met at the weekend in Abuja.

THISDAY gathered that the meeting, which was the first since Kwankwaso's defection from the All Progressives Congress (APC) to the Peoples Democratic Party (PDP) recently, was to bury their differences and form a formidable team that would mobilise the electorate in the state against President Muhammadu Buhari and Governor Abdullahi Ganduje ahead of 2019 elections.

It was also gathered that it was the first formal meeting of the former political opponents in 15 years when Kwankwaso paid a congratulatory visit to Shekarau for defeating him in the 2003 governorship election.

According to impeccable sources, the brief meeting took place at Shekarau's Asokoro residence in Abuja on Saturday night.

Although the two Kano political gladiators held the meeting behind closed-doors, an excited Shekarau who was heard telling his visitor “no hard feelings, and I don't bear any grudge,” at the end of the meeting.

In reply, Kwankwaso also said he did not bear malice against him, promising his commitment and collaboration towards the success of the party.

Following Kwankwaso's defection to the PDP last week, the senator has been extending olive branch to politicians in the PDP towards realigning the party structure at the state level.

THISDAY reliably gathered that the party leaders at the national level had favoured Kwankwaso to have 51 per cent stake in the party structure, having joined the party alongside nine members of the House of Representatives.

“Essentially, he is the most powerful force in the state today. This is what the party at the national level considered to cede the control to him,” said a source familiar with the equations.

In a related development, the senator representing Sokoto South Senatorial District, Senator Ibrahim Danbaba, Sunday said he defected from the APC to the PDP because of lack of equity, justice and fairness to members.

He also said the ruling APC would lose 10 northern states in the 2019 general election.

Speaking with journalists at his residence in Sokoto, Danbaba maintained that the APC-led federal government had derailed from its mandate and failed to meet the yearnings of Nigerians.

According to him, he has no other option than to leave the ruling party because of lack of inclusiveness and the quest for the survival of democracy in the country.

Danbaba posited that he was compelled to leave the party because of the failure of the party leadership to address their grievances.

He lamented that the APC had failed to address the three core issues of security, economy and corruption that it was voted into power in 2015.

“I left the APC to join the PDP because the leadership of the party has derailed and ignored the advice of members, despite all our efforts to salvage the situation. I also consulted my constituency before doing so,” he said, adding: “Whatever affects Nigeria affects all Nigerians. We campaigned on three cardinal issues of security, economy and corruption in 2015 based on the integrity of President Buhari but unfortunately there is no improvement on the three issues.”

Danbaba said the PDP would take over 10 northern states in the forthcoming election.

“The stronghold of APC is in the north. PDP will soon take over Benue, Kaduna, Kano, Plateau, Kogi, Kwara, Bauchi, Gombe, Adamawa and Sokoto States in 2019. The balance of power is now tilted in favour of the PDP,” the senator said.

The lawmaker emphasised that the party leadership dissipated its energy in fighting perceived enemies rather than working assiduously to meet the yearning and aspiration of Nigerians.

He also accused the party leadership of persecuting the Senate President, Dr. Bukola Saraki, thereby derailing from its core mandate of meeting the yearnings of the people.

Danbaba said: “The ongoing fight against corruption is selective because the Code of Conduct tribunal had no jurisdiction to take Saraki to court.

“Saraki offended the powers that be and they are determined to send him to prison. We did not envisage such kind of vendetta when we worked for APC in 2015. We expected that the party will meet the aspiration of Nigerians but it failed to do so.”