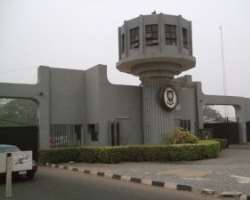 The University of Ibadan, Oyo State has been ranked the best Nigerian university in the July Webometric ranking of world universities.

According to a report in The PUNCH, the 70-year-old Nigerian premier university emerged the best among 100 Nigerian tertiary institutions but was rated 905 in the world.

The report also indicates that eight-year-old Afe Babalola University, Ado-Ekiti is the best private university in the country, having emerged second overall best in Nigeria and 2,287 in the world.

Obafemi Awolowo University, Ile-Ife was rated fifth best Nigerian varsity and 3,545 in the world, ahead of the University of Port Harcourt; and Federal University of Technology, Owerri.

University of Lagos, Akoka, appeared in the eighth position among Nigerian higher institutions and ranked 5,025 in the world. Ahmadu Bello University and the University of Agriculture, Abeokuta, Ogun State, completed the list of the first 10 universities in the country.

The newspaer cited a statement on Sunday by Tunde Olofintila of ABUAD which extols the pace-setting landmarks by the institution which was founded by a renowned Senior Advocate of Nigeria, Aare Afe Babalola, to tackle the decay in Nigeria's national education.

He said ABUAD was set up to “be a practical example of how problems militating against the growth of Nigerian universities can be solved and lead others in quality and functional education.”