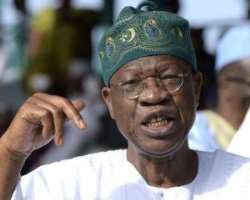 The federal government has directed all members of the All Progressives Congress (APC) in Kwara State in the camp of the Senate President, Dr Bukola Saraki, holding various federal government appointments to resign immediately or risk being sacked.

Recall that six members of House of Representatives from Kwara state were among those who dumped the party for the Peoples Democratic Party (PDP) during the week.

The minister of Information and Culture, Alhaji Lai Mohammed, gave the directive at a press conference in his country home, Oro, in Irepodun local government area of Kwara state on Sunday.

He also expressed the intention of the federal government to dissolve the Senator Bukola Saraki-led All Progressives Congress (APC) in Kwara state under the chairmanship of Alh Ishola Balogun Fulani earlier adopted by the national chairman, Comrade Adams Oshiomole and conduct another congress.

The minister said the new development was as a result of the wide consultations with all the stakeholders in the state since Friday, which climaxed yesterday.

Mohammed explained that there would be another Congress from the ward, till the state that would produce another leadership in the state, saying that pending that time, Alh Bashir Bolarinwa’s leadership would hold sway in the state.

He stressed that it is unacceptable that members of the party who refused to desert the party would not benefit from the government, while those who have decamped to other political parties would still hold on to the political appointment of a party they have dumped.

He, therefore, warned that if they fail to resign from the appointments as directed, the federal government would sack all of them unannounced.

The minister, who said that the consultation’s that led to the directives in Kwara state was with the knowledge of the national chairman of the ruling party, Comrade Adams Oshiomole, urged members of the party in the state to remain calm.

He, however, noted that the door of the party is widely opened to members who are willing to return to the party.

The minister also exuded confidence that the ruling APC would win the gubernatorial election in the state in 2019 election, adding that the electorates will also vote overwhelmingly for the re-election of President Muhammad Buhari and his vice, Professor Yemi Osinbajo.

According to him, “For six members of House of Representatives to decamp from All Progressives Congress in Kwara state, to other political parties, we don’t need a rocket science to know, that all of them are no longer with us.

“They cannot continue to enjoy the political appointment of a party they have dumped, while those who are our genuine members, still in the party don’t have such benefits.