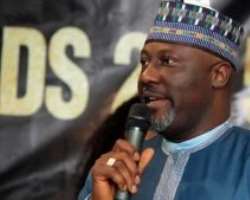 Nigeria's controversial Senator Dino Melaye has been reported abducted as the police appeal for information on his whereabouts.

The former ruling All Progressives Congress (APC) lawmaker representing Kogi West district, was reported abducted by gunmen in Gwagwalada, a suburb of Abuja, but latest information say he ran into the bush to escape an attack.

Senator Ben Murray-Bruce, who represents Bayelsa East, had reported in his Twitter handle on Thursday.

He revealed that he got the information from Melaye's brother who said the lawmaker was reportedly kidnapped after the gunmen attacked them on their way to Kogi State.

Ben Murray-Bruce
✔ @benmurraybruce
I have just been informed by Moses Melaye, @ dino_melaye 's brother, that Dino has been abducted by unknown persons in a Toyota Sienna that blocked their car and overpowered them on their way to Kogi to answer to Dino's court case. Lets be on the watch out. Will keep you updated.

Twitter Ads info and privacy
One of the associates of the lawmaker who witnessed the incident, Musa Shuaibu, told reporters that he was abducted along the Abuja-Lokoja Highway.

Shuaibu said, “As we speak, his (Melaye's) whereabouts is unknown. Nigerians must come to his rescue.”

However, the police have yet to confirm the abduction.

Melaye was among the senators who defected from the All Progressives Congress (APC) to the Peoples Democratic Party (PDP) on Tuesday.

Meanwhile, the lawmaker's trial over alleged gun running continued on Thursday at the Magistrate Court in Lokoja, the Kogi State capital.

His lawyer, Mike Ozekhome, who was represented in court by Yemi Mohammed, told Magistrate Suleyman Abdalah that he had it on good authority that the senator was attacked on Wednesday while living for Lokoja.

According to him, the whereabouts of the lawmaker has yet to be ascertained up till the time the Magistrate Court sat for his trial.

Similarly, an officer in charge of police prosecution, Theophilus Otema, told the magistrate that the prosecuting counsel had an emergency which made it extremely difficult for him to appear in court.

He then requested that the matter be adjourned till September 23, but the magistrate rejected the date saying it contravened the Administration of Criminal Justice Law of Kogi State, as amended.

The Police Force says it has not received any complaint about the reported abduction of Senator Dino Melaye.

Force Public Relations Officer, Mr Jiomoh Moshood, said this in a statement on Thursday night that although the police have no formal complaint, but the authorities are aware of the media reports and are investigating the incident.

Force Public Relations Officer, Mr Jimoh Moshood, said none of Senator Melaye's family members, friends, and associates has made a complaint to the police

To aid the investigation, the police called on witnesses and family members to come forward.