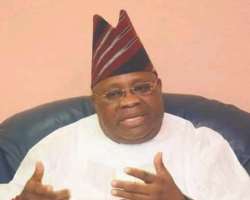 Six governorship governorship aspirants of the People's Democratic Party in Osun State and top party chieftains as well as members have said that they want Dr Akin Ogunbiyi as the candidate of the party.

Addressing a press conference in Osogbo, one of the aspirants, Professor Deolu Durotoye who spoke on behalf of others alleged that the election was rigged and that Ogunbiyi's votes were stolen.

The primary election of PDP held on Saturday 21st of July, 2018 at the GMT hotel in Osogbo was conducted by Governor of Bayelsa State, Mr Seriake Dickson.

Durotoye said "contrary to the promise made by the new leadership of our Party, the reign of impunity appears to have continued unabated with the way and manner the primary election in Osun state was conducted."

He lamented that the exercise was marred by gross violations of the Electoral Guidelines issued by the National Working Committee as well as outright manipulation of the results of the election in favour of Senator Nurudeen Ademola Adeleke in a manner suggesting that he was the favored candidate of some ‘powerful’ individuals in the top echelon of the PDP.

"We make bold to say that Senator Adeleke did not in fact score the highest number of votes in that primary election having polled a total number of 1569 as against his major opponent, Dr Akin Ogunbiyi whose actual votes at the point of sorting was 1690."

"These figures were indeed confirmed by security agents, Media men and some of the electoral officers who watched keenly as the ballot papers were being sorted at the end of voting

Apart from the very shameful incidence of votes pilfering which happened during a brief period of an orchestrated power black-out, 42 valid votes cast for Dr Akin Ogunbiyi were counted as invalid by the electoral officials in spite of the persistent protests of his agents."

"Such a brazen disregard for best global practices in electoral processes is certainly unexpected of a party desirous of dislodging a party in government through a free and fair election."

Durotoye also frowned that the National Working Committee of the party sitting as an appeal committee to redress this clear case of electoral fraud and injustice perpetrated by the Electoral Panel on Saturday."

"While we had expected that the Party would be mindful of the need to protect the sanctity of the electoral process and dispassionately consider the issues arising from the conduct of the Primaries, It was most unfortunate to read in the Media that the name of Senator Nurudeen Ademola Adeleke has been submitted to the Independent National Electoral Commission as the PDP candidate for the Osun State Governorship election."

Durotoye said the outcome of the primary was rejected because because Senator Nurudeen Ademola Adeleke was not the choice of majority of delegates at the Primary election.

He added that Adeleke is the least qualified of the 11 aspirants who obtained forms to contest for the primaries of the PDP in our dear State.

Accoring to him, "fielding Senator Nurudeen Ademola Adeleke as our Governorship candidate will put the chances of our great party at risk in view of the several legal and moral issues which will arise before and during the electioneering campaign."

"The candidacy of Senator Adeleke will further divide rather than unite the PDP in Osun State in view of the fact that a great number of party members will not feel secured working for him because of the very controversial circumstances of his nomination."

He also said PDP may not be able to secure the support of critical stakeholders in the State with Senator Adeleke’s candidacy because of what he described as "Adeleke's not too impressive public conduct as a Senator."

"In view of the foregoing therefore, we the under listed aspirants call on the National Leadership of our Party to rescind its decision on the nomination of Senator Ademola Adeleke as our candidate for the September 22nd Governorship election."

"We call on the National Working Committee of the PDP to reconsider its stand on the Appeal filed by Dr Akin Ogunbiyi who was the actual winner of the Primary election held on the 21st of July with a view to redeeming the hope of our party and that of the good people of Osun State."