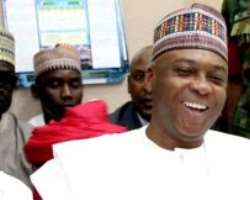 Senate President Bukola Saraki on Wednesday explained why he did not honour police invitation to report on Tuesday at Guzape police station in Abuja over April 5 Offa bank robbery. He said he had responded formally in writing to all the questions and issues raised in the police invitation letter on Tuesday hence there was no need for him to appear personally at Guzape police station.

The Senate President in a statement by his Media Adviser, Yusuph Olaniyonu, said his response to the Police invitation which was despatched on Tuesday was duly acknowledged.

According to him, all the issues and questions raised in the police invitation letter were answered and sent to the police authorities on Tuesday.

He noted that after answering all the questions raised by the police in his letter, he did not think there was any need for him to go to the police personally.

The Senate President added that his letter to the police was self-explanatory hence there was no need for him to go personally to the police for the same issue.

The Inspector General of Police, Ibrahim Idris, had on Monday invited Saraki to appear before the Police Special Anti-Robbery Unit in Guzape police station to answer questions over his alleged involvement in the Offa robbery incident.

Saraki had stated in an earlier response on Monday that the invitation by the Police to report to a station in Guzape over the Offa robbery investigation was “a mere afterthought which is designed to achieve political purpose. “

He had stated then that he had it on good authority that the Police had already decided on the suspects to arraign in court in Ilorin, Kwara State on Wednesday based on the advice of the Director of Public Prosecution (DPP), Mohammed U.E., and that the turn around to invite him was a ploy aimed at scoring cheap political points.