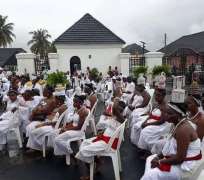 Ooni Ogunwusi said this on Saturday while making his speech during this year's edition of the annual Osun festival tagged "Ita Osun 2018" held at the Osun shrine, Ita Osun in Ile-Ife which served as the first settlement of Osun goddess from where she moved around the world.

"Tradition is the root of Yoruba's heritage, Nigerian government and all the states in Yorubaland must invest cultural tourism to productively drive economic growth as this is the case in Isreal, Saudi-Arabia, Brazil and other tourist destinations in the world using pilgrimages as as lucratice economic tourism." Ooni said

The Co-Chairman of the National Council of Traditional Rulers of Nigeria also used the occasion to preach peacefuil coexistence among Nigerians saying Nigeria will survive at the time of challenges only if the people maintain peace with one another irrespective of religion and ethnicity.

As the Custodian the sacred throne of Oduduwa, the progenitor of Yoruba people worldwide, Ooni explained that Osun is one of the 401 deities sent by the Almighty God to form the world from Ile-Ife then known as Ife-Oodaye.

He said while Oduduwa, Ogun and Kori were in charge of Prayer, Iron and children respectively, Osun was made a deity that has to do with water who should always be celebrated as no one can function without water.

The African foremost monarch concluded his speech by insisting Nigerians must uphold their cultural heritage and traditions by showcasing deities like Osun saying water is an essential commodity that necessary and compulsory for humanity.

"No one can be enemy to water, we should therefore celebrate and always remember this deity that has to do with productivity and multiplication".

"We are not Idol worshippers as people think of, but we are promoting our cultural heritage as being done all over the world because any stream that forget the source will surely dry".

Am pleading with our governments at all levels especially in Yorubaland to support prioritizing tradition and culture of Yoruba for exonomic gains because tradition is the root of our heritage.

"We are celebrating Osun festival by reviving and sustaining our culture, adding that festival is a good thing to value and embrace, because our culture and tradition are dying.

"We need to proudly acknowledge our own Ooni of Ife, who is trying his best to ensure the stability of our cultural heritage. This why our tourism promoting governor, Senator Ibikunle Amosun FCA has always taken part in all the Cultural event organized the Arole Oodua represented by me as his Commisioner for Culture and Tourism." Rt.Hon Oladipo said

Oladipo admonished all and sundry to support the royal father in uplifting the tradition, saying culture is different from religion.

Dr Santos Pedro Bernardo, a Brazilian tourist from Rio De Janerio who was among the several foreigners that came from contries like Cuba, Brazil, Jamaica Congo Republic, South Africa an USA to witness the Osun fetival expressed delights for the cultural reception they all have so far enjoyed at Ile-Ife which they described the ancestral home not only to the Yorubas but also to the entire mankind.

Speaking with journalists in company of his co-tourists, Pedro Berbardo lauded Ooni Ogunwusi's commitment to African cultural tourism revolution which has taken him to several countries including Brazil where he met him recently.

"Ooni is undoubtedly the global face of cultural tourism revolution at the moment. I read about him in 2016 when he travelled to America with about 100 chiefs and priests, awesome! I have since then developed interest in him and I went to meet him at a Rio' heritage site CRISTO REDENTOR, a Giant (98-ft.-tall) mountaintop statue of Jesus Christ, accessed by train & offering city views with

"We been visiting tourist sites in Ile-Ife since two days ago Am so amazed to see this land is so culturally blessed especially the Nigeria's tallest Statue of liberty built 2 years ago by this Ooni Ogunwusi in honour of Moremi Ajasoro. Nigerian government must really encourage this great monarch" Santos Pedro Bernardo said