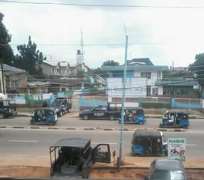 As the leadership crises rocking the Delta State chapter of the All Progressives Congress (APC) deepens, policemen of the State Command besieged the party headquarters in Asaba to arrest breakdown of law and order.

It was reliably gathered that the Senator vie Omo-Agege and Chief Great Ogboru-led faction under the chairmanship of Prophet Jones-Ode Erue, was set to inaugurate his state and local government executives but it suffered huge setback as the event could not hold due to the heavy presence of armed police officers.

Impeccable sources confided on The Nigerian Voice that the Chief Cyril Ogodo-led faction upon tip off that the National chairman of the party, Comrade Adams Oshiomole, was on his way to inaugurate the Prophet Erue’s faction sought police intervention to prevent the inauguration.

It was learnt that at about 10 Police Hilux Vans with their personnel blocked the two entrance gates to the secretariat to maintain peace, save lives and properties.

It was gathered that the pro-Senator Omo-Agege/Chief Ogboru-led faction was supposed to gain entrance into the party secretariat as authentic party leaders, but were denied access into the office.

A brief engagement with a local government area exco members of the party, loyal to Prophet Erue faction maintained that it was their faction that called the intervention of the police.

Another pro-Prophet Erue supporter said that they are confident that their event will still hold, as they are sure that their faction's leadership would mobilize more security operatives so that their function can hold.

He also maintained that their faction's proactive action was predicted upon the premise that they were hinted that the Chief Ogodo-led faction has perfected plans to use political thugs to disrupt their function.

“Our leadership is democratic and believe in peaceful political engagement, hence, the invitation for police intervention, our source hinted” just as some party faithfuls from the two factions were sighted hanging around the party Secretariat, ready to cash into the unfolding realities.