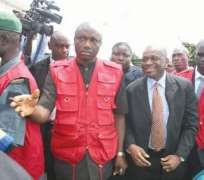 A former Governor of Abia, Orji Uzor Kalu, was on Tuesday re-arraigned at a Federal High Court in Lagos on an amended 39-count bordering on fraud.

Kalu, who is now a member of the ruling All Progressives Congress (APC) is being prosecuted by the Economic and Financial Crimes Commission (EFCC).

The anti-graft agency is prosecuting Kalu together with his former Commissioner for Finance, Ude Udeogo, and a company, Slok Nigeria Ltd., said to be owned by Kalu.

The News Agency of Nigeria (NAN) recalls that the EFCC had on Oct. 31, 2016, preferred 34 count charges, including a N3.2 billion fraud charge.

Kalu and Udeogo had however, pleaded not guilty to the charges and were granted bail.

The EFCC closed the prosecution in May 2018, after calling a total of 18 witnesses and tendering a plethora of evidences before the court.

When the case came up on July 16, the EFCC Prosecutor, Mr Rotimi Jacobs (SAN), informed court of a “second further amended charge”, urging the court to order the accused to take their pleas.

But Kalu’s defence team, comprising Mr Awa Kalu (SAN), Chief Solo Akuma (SAN) and Mr K. C. Nwofo (SAN), had all opposed the amended charge on grounds that it was not done in accordance with the provisions of the law.

They urged the court to refuse the amended charge.
In a short ruling on Tuesday, Justice Mohammed Idris (who has now been elevated to the court of appeal), while interpreting the provisions of Sections 216 and 217 of the Administration of Criminal Justice Act, held that the prosecution could amend the charge.

According to the court, an alteration of a charge can be allowed at any time, while the court accordingly, calls upon the accused to plead to the new charge and proceed with trial.

The court held that it cannot shut out the prosecution from filing a second amended charge as the defence had not showed that the amendment would be prejudicial to it.

After the court’s ruling, the accused were then re-arraigned on the new charges, and they again, each pleaded not guilty, while the court allowed them to continue with the earlier bails granted.

The defence team then informed the court of their various “no case submissions” filed on behalf of the accused, adding that they had served same on the prosecution, which in turn, filed a written address in reply.

The defence argued that the prosecution’s address was over 100 pages and so, they would require time to study same and make a response.

Idris then adjourned the case until July 25 to hear addresses on the “no case’’ submissions.

In the charge, the accused were alleged to have committed the offence between August, 2001 and September, 2006.

The sum is alleged to have formed part of funds illegally derived from the treasury of the Abia State Government,

In one of the counts, Kalu, his company (Slok Nig Ltd), one Emeka Abone and Michael Akpan, who are said to be at large, were also alleged to have between 2001 and September 2006, collaborated to commit an offence.

They were alleged to have concealed the genuine origin of an aggregate sum of N7.2 billion, which formed part of funds illegally derived from the Abia State Treasury, and converted same into several bank drafts, which were subsequently, paid into the account of Slok Nigeria Ltd.

In counts one to 10, the accused were alleged to have retained about N2.7 billion in different accounts, which funds were said to belong to the Abia State Government.

Cumulatively, in all the counts, the accused were alleged to have diverted over N7.1 billion from the Abia State Government’s treasury, during Kalu’s tenure as governor.

They also contravene the provisions of the Money Laundering Act of 1995 as amended by the amendment Act No. 9 of 2002 and Section 477 of the Criminal Code Act, Laws of the Federation, 1990. (NAN)