ON NIGERIA, ICC President is biased 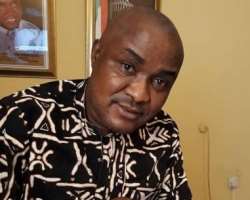 The International criminal court in the Hague, Netherlands is a global legal forum whereby the most atrocious types of crimes against humanity which are left unattended to in their nations of origin are prosecuted.

Since coming into being however, the Rome Treaty setting up this world court has encountered teething legitimacy crises including the refusal of the world's Super powers like the United States of America to recognize it.

Although it is affiliated to the United Nations, the international criminal court (ICC) has since two decades of its existence came under the crucible and strident criticisms of persons who say that it has become an arena of witch-hunt targeting largely leaders of the developing world.

Those who think the international criminal court is against less developed societies, had persistently cited the inability of the court to bring any western leader of significance to trial even when there are suspected cases of war crimes committed by some leading military powers in the World. For instance George Bush and Tony Blair of USA and Britain constituted allied forced that bombed Saddam Hussein of Iraq under the false claim that he had weapons of mass destruction but these weapons were never found but Iraq was destroyed and Saddam Hussein was dethroned and killed.

Cases in point in which the ICC has failed to completely come clean from allegations of inbuilt weakness to bring perpetrators of war crimes to trial included atrocities committed by world leaders that deployed military troops to fight terrorists in the Middle East and in Afghanistan. In Afghanistan, US military jet had few months back during the Barack Obama regime dropped bombs at a hospital facility leading to several fatalities.

However, most other people applauded the ICC for stepping into the cases of war crimes in Kosovo, the former Yugoslavia and in some African Nations including Liberia.

For some of us practicing human rights promotion and protection in a systematically endangered democracy like Nigeria, we have continued to give our unqualified support to the international criminal court even when we also express the optimisms that soon the global crime court would enjoy the support of such a great world power like the United States of America since it is a pivotal leader of the security council of the United Nations.

It would be recalled vividly that the preamble to the charter of the United Nations and statute of the international court of justice states as follows: “Determined to save succeeding generations from the scourge of war, which twice in our lifetime has brought untold sorrow to mankind, and to reaffirm faith in fundamental human rights, in the dignity and worth of the human person, in the equal rights of men and women and of nations large and small, and to establish conditions under which justice and respect for the obligations arising from treaties and other sources of international law can be maintained, and to promote social progress and better standards of life in larger freedom...."

Writing under the title of “The Expanding Frontiers of Justice: The Challenges of Global Justice,” a retired supreme court’s justice in Nigeria and former chief justice of the Gambia, Emmanuel Ayoola unambiguously stated the grievous nature of war crime and why such a forum like the international criminal court is essential.

Another description of war crime, he said, is that the category of conduct classified as international crime has the following characteristics: (1) It is so serious as to be of concern to all nations and not just to the state in which it occurs. (2) Individuals guilty of it incur criminal responsibility under international law.

The ICC has however been swimming in the bad tides and indeed in the band wagon of controversy and credibility questions even when there are clear evidences that some past leaders have had to be sentenced to life imprisonments for their crimes against humanity such as the erstwhile Liberian president Charles Taylor. It would be noted that it was Nigeria under then President Olusegun Obasanjo that handed over Charles Taylor to the ICC. Perhaps, this salutary role of the Nigerian government has yielded fruit in the emergence of a Nigerian to head the International Criminal court.

This news of the making of the Nigerian as head of the ICC happened around March this year just as the news that broke was that a Nigerian lawyer, Mr. Chile Eboe-Osuji, has been elected the President of the International Criminal Court, The Hague, Netherlands.

According to information on the ICC’s website, Eboe-Osuji was elected as President by his fellow judges on the ICC bench at a plenary session on Sunday, March 11, 2018.

He would head the court for a three-year term, ending in 2021.

Fifty-five-year-old Eboe-Osuji, who joined the ICC on December 16, 2011, will be working in his position as the ICC President, alongside Judge Robert Fremr, from Czech Republic; and Judge Marc Perrin de Brichambaut, from France, as the First and Second Vice-Presidents of ICC, respectively.

Eboe-Osuji, was quoted as saying that he was “deeply honoured to have been elected by my peers as President of the International Criminal Court.”

He said, “As I take up my duties, I feel encouraged that I am able to rely on the wide experience of the two Vice-Presidents, Judge Robert Fremr and Judge Marc Perrin de Brichambaut, both of whom I have closely worked with previously.

“I look forward to working together with them as well as with all the judges, all the officials and the staff of the court in a spirit of collegiality.

“I also look forward to collaborating with the Assembly of States Parties, civil society and the international community at large, acting together to strengthen and reinforce the Rome Statute system, the 20th anniversary of the adoption of which we celebrate this year.”

He expressed his gratitude to the previous ICC President, Judge Silvia Fernández de Gurmendi, and Vice-Presidents, Judges Joyce Aluoch and Kuniko Ozaki, “for their work and leadership.”

Eboe-Osuji, who comes from Anara, Imo State. He has been a longstanding staff of the ICC.

From 1997 to 2005, Eboe-Osuji worked at the International Criminal Tribunal for Rwanda as prosecution counsel and senior legal officer to the judges of the tribunal.

However, this newly appointed head of ICC began his job very badly by paying political visits to Nigeria whereby he reportedly met President Muhammadu Buhari and other politicians.

He uttered no word regarding the stories and verifiable cases of atrocious mass killings going on all around Nigeria which the government of president Buhari has failed to stop.

As if that disappointment of this international jurist dancing naked dangerously in the political arena by paying a political visit to Abuja was not enough, the Nigerian presidency would now proceed few weeks after this politically tainted visit by the new president of ICC to harvest spectacular public relations objectives from the office of the presiding judge of the ICC who was said to have invited president Muhammadu Buhari to speak at the 20th anniversary of this global legal forum which should combat genocides.

President Buhari has therefore celebrated his invitation by the ICC as a validation of his government when in fact this current administration has on many fronts failed the simple test of human rights compliance.

Amnesty International has also documented huge scale evidences of crimes against humanity committed by Nigerian soldiers who were sent by President Buhari to crush unarmed civilians in the South East of Nigerians who were clamouring legitimately for self-determination; just as on the last count over 600 people were slaughtered including young men and women from the local government area council where this President of ICC comes from.

Also, the International Community do also have documentary evidence of the atrocious killings of 300 members of the Islamic movement of Nigeria by soldiers in Zaria two years ago when they reportedly blocked the convoy of the military chief of Nigeria.

The outgoing French Ambassador to Nigeria, Mr. Denys Gauer, has verifiably identified impunity and injustice as the factors driving the killings and bloodshed in Plateau, Benue, Kaduna and other parts of the country.

The envoy attributed the killings to struggle for land, noting that foreigners were not involved in the bloodshed in the Middle Belt region.

Addressing journalists in commemoration of the 2018 French National Day in Abuja on Saturday, the diplomat who would be rounding off his tour of duty at the end of the month, said Nigerians deserved to enjoy effective security and better governance than the government was currently providing.

He admonished the Federal Government to punish those behind the killings.

The envoy advised the government to develop agriculture and animal husbandry to address the crisis.

“The reason for the killings is demography; some people are fighting for land, so there must be direct policy to develop agriculture and animal husbandry. I think impunity is encouraging the killings and those responsible must be punished. I don’t believe foreigners are involved in the killings,” he said in response to a question about the claims by the Federal Government that Libyan mercenaries were responsible for the bloodshed.

The envoy added, “The second is justice. When there is that kind of killing, there must be proper prosecution and perpetrators must be properly sentenced. If that does not happen, then, it cannot end.”

Gauer noted that foreign investors and partners would not be willing to invest in the affected areas on account of the security challenges there.

According to the diplomat, Nigeria has recorded great progress against Boko Haram, but the sect, he said, had not been eliminated.

He explained that the security forces needed to maintain their offensive against the insurgents so that the displaced persons could return to their communities.

But disgracefully, the ICC presided over by a Nigerian went ahead to invite the president of Nigeria whose government has serious indictments of failing to punish perpetrators of war crime.

The Economist in the July 14th - 20th 2018 edition reported the grave human rights situation in Nigeria thus: “Nigeria’s generals talk about ‘winning hearts and minds’ but they are doing the opposite. The army has systematically cleared people from the countryside, burning their villages and packing them into squalid camps in Maiduguri and other ‘garrison towns’. In all, some 2.4m people have been displaced by the fighting in Nigeria and neighbouring countries. The army argues that it is necessary to move people away from the fighting to protect them and to deny the jihadists food and shelter. ‘There are no innocent people in the bush’ says Mr. Kalli of the CJTF”.

“Most observers think that indiscriminate killings by the army and the forcing of people into garrison towns are fueling the insurgency. There are almost no jobs in the camps. Access is through checkpoints manned by the army and CJTF, who demand bribes. Amnesty International, a human-rights group, says many women and girls have been raped in the camps and that hundreds if not thousands of people confined in them have died of starvation or a lack of medical care.”

How can any Nigerian still have the trust of this ICC under such a politically exposed Nigerian lawyer who has clearly displayed a primitive level of biasness? He must excuse himself from the plethora of petitions filed before the ICC against the President of Nigeria Muhammadu Buhari since he Mr Osuji has displayed incredible insensitivity towards the victims of mass killings in Nigeria under the watch of the current political leadership at the central government of Nigeria.