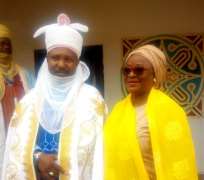 The Emir of Uke in Nasarawa State, Alhaji Ahmed Abdullahi Hassan has conferred the traditional title of Jakadiyan Lafiya of Uke on the former President of Nigeria Association of Women Journalists (NAWOJ), Mrs Moji Makanjuola.

The traditional ruler announced the conferment of the traditional title on Makanjuola when a team of journalists drawn from different parts of the country paid an advocacy visit to him in his palace at Uke.

The Yankanajie of Uke explained that his decision to confer the traditional title on Makanjuola was informed by her contributions to human and national development. The Emir charged Makanjuola to keep impacting lives for the good of humanity.

The Emir said "I must acknowledge the contributions of the media to the national development. I'm glad to receive you here today. For a long time, we were cut off from the development going on in the country. We were marginalized. But with the help of the media, development has started getting to us. I must appreciate the Governor of Nasarawa state, Alhaji Tanko Almakura for bringing development to us".

Responding in her emotion laden voice, Makanjuola thanked the Emir for the honour and vowed to keep up good deeds that attracted the honour to her. She expressed gratitude to her husband and children for supporting her to succeed as a woman journalist.

Makanjuola assured the Emir that Uke would benefit from the outcome of the efforts of the development partners and the media practitioners in a bid to ensure healthy living for all Nigerians. She also promised to facilitate economic development to Uke.

The new Jakadiyan Lafiya of Uke said "Uke is my home. But I didn't even know that we were coming here. I didn't prepare for this. Your Royal Highness, I thank you very much. We have realised that health insurance is the best way to go in order to achieve universal health coverage so as to ensure that everyone lives healthy live. I can assure you that Uke will benefit from the outcome of this efforts."

Meanwhile, the Nigeria Association of Women Journalists (NAWOJ) has congratulated Makanjuola for her new traditional title as the Jakadiyan Lafiya of Uke.

The National President of NAWOJ, Mrs Ifeyinwa Omowole described the conferment of the traditional title of Jakadiyan Lafiya on Makanjuola as a well deserved honour. Omowole promised that NAWOJ would support Makanjuola in attracting development to Uke.

Omowole said "the traditional title of Jakadiyan Lafiya given to Mrs Moji Makanjuola is a great honour for all journalists in the country, particularly the NAWOJ".

"We are happy that a former President of NAWOJ was recognized for doing great and contributing to human and social development. We shall be part of the development of Uke in appreciation of the decision of the Emir to honour our own," Omowole.