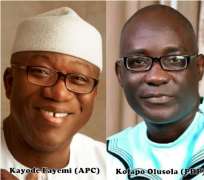 The much awaited Ekiti state election has come and gone as the APC’s Gubernatorial candidate; Kayode Fayemi was eventually declared the winner after the intrigues, drama and tensions that enveloped Ekiti state and Nigeria in general. However, the impacts and imprints of the elections might live with us for the next fifty (50) years to come in terms of election conduct, election monetisation, mistrust of electoral umpire, security institution amongst others.

Prior to 14th July, 2018, there have been allegations and counter allegations from the two (2) major political parties (APC &PDP) in the contest as other thirty two (32) political parties seemed unpopular. One of these major allegations has to do with how money was moved around in order to influence the outcome of the election. The spokesman to Governor of Ekiti state; Lere accused that eighteen (18) billion naira was moved to Akure airport by APC- led Federal Government which was dispatched into two (2) bullion vans that eventually conveyed the said money to Ekiti state.

The APC also alleged that a private helicopter landed in Ekitistate Government house and that the mission of the helicopterwas to deliver money to Governor Fayose for the purpose of prosecuting the election in favour of PDP as a political party. At first, all these allegations seem as one of those common cheap campaign strategies usually deploy by politicians but most Nigerians received the shock of their lives when money was openly shared, used to entice electorates right at the polling centres.

Though, our democracy seems to be nascent in term of comparison to advanced countries hence, the encouragement that we would grow from the socio-political vices that have permeated the scenes of Nigerian politics which have manifested in form of corruption, mismanagement, misallocation, and misappropriation amongst others for almost twenty (20) years. The situation has taken a nose-diving dimension into a debasing, degrading and dehumanising case as electorates were bought over with money which a school of thought has hinged on the fact that there is creation of ‘artificial hunger’by both Federal and Ekiti state Governments by deliberately not paying civil servants salaries compounded by the already battered and volatile economic situation of the country thereby living the haggard looking electorates vulnerable. However, there were few people who never sold their future for pot of cheap potage that obviously lack salt.

This is a call for concern to every lover on Nigerian democracy most especially academic scholars and activists as moneybag politics is a bad omen to democracy anywhere in the world. When the highest bidder takes the victory home then criminals would definitely be encouraged to go rob banks and innocent citizens and use the proceeds to buy elections victory therefore, our democracy would have no hope, no future and dividends for the poor masses who might have what to offer but lack the money to buy votes and the people who are supposed to be the centre of democracy.

If we failed to correct this anomaly in the political system right now, someday Evans; the billionaire kidnapper and the likes would be our leaders at National Assembly, State House of Assemblies, Government Houses and other political climes. This would also breed insecurity within the political space as crimes; assassinations, political thugerry, among others would be the order of the day.

It is high time Nigerians took the singular role of educating one another on the danger of selling their votes in this era of civilisation especially as National Orientation Agency (NOA) has gone into oblivion. Unfortunately for poor masses, they are always at the receiving ends no matter what, let’s go into economic calculation a bit of how money was shared in this election and how the poor masses who received less might also be the ones paying dearly in the next for year.

Some few powerful power brokers got over five hundred million (500,000,000) naira to one billion (1, 000, 000, 000,) naira. Some of them were directly in charge of these funds and they decided what share should be theirs. I believe we are beginning to see why politics is a do or die affairs in Nigeria and why thousands of people are ready to sleep in coffins for days and drinking human blood in order to attain political power and forcefully retain it even if it requireseverybodyto die including their family members and this trend will continue until we demonetise our politics characterised with bogus allowances without tangible work for it. Politics in Nigeria is the biggest investment for those that are in power as over thirty billion (30,000,000,000) was alleged to have exchange hands in Ekiti election.

I pity Ekiti state people because the money some of them collected and thought it is free money; it is actually a ‘Greek Gift’ with string attached to it , some months and years to come they might pay dearly with deflated tummy from economic hardship that would hit them hard like never before. The money is investment of some few individuals who is anxiously waiting for their investment to yield bountifully unfortunately, the state allocations has dwindled over time due to the economic recession the country is battling with.

Finally, I would want Nigerian stakeholders and lovers of democracy to work on best modalities in which our balloting system (open secret ballot) could be improved upon. It is now evident that most of the money exchange took place at the polling booths and this is so perfectly executed as the political parties’ agents involved in the money racketeering would position themselves in a strategic corner where the electorates could show them the ballot papers and having confirmed the party thump-printed thereafter, they come and collect their pay meanwhile, over thirty thousand (30,000) security personnel were on ground while the business transaction go on unchecked.

It is disheartening to hear some of these issues when some countries have gone to the level of people dashing out from place of work to go vote and some people would be in the space (ie moon) and still participate in election by voting for candidates of their choice without much ado like the war-like situation will find ourselves in Nigeria. So pathetic!