July 14: Nigeria and Ondo’s Mistake Ekiti People must not Make 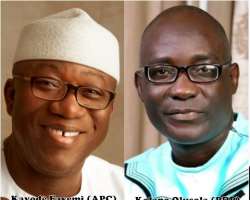 As we inch closer to the July 14 governorship election in Ekiti State, stakeholders are putting final touches to their preparations to ensure not only a hitch-free election but also that the deserved party wins and continue to take the State on an upward projection. The news that the police hierarchy is deploying as much as 30,000 police personnel to Ekiti for the election is an indication of how seriously our security agencies are taking the exercise. The only concern here is, why so much number of policemen for an election, a civic exercise in a very peaceful State while Benue, Plateau and other flashpoints in the country are lacking in police personnel to help stem the growing ugly tide of mass murders we have witnessed in the country recently? That would be an issue for another day.

However, the massive deployment of police personnel to Ekiti underscores how seriously various stakeholders take the forthcoming election. It is the penultimate election before the 2019 general elections with the Osun governorship election standing between them, thus, making the Ekiti election serve as a yardstick for how well various institutions, particularly INEC, are preparing for the 2019 general elections. It would also be used to measure INEC’s true independence from influence and powerful extraneous interests and forces.

So, in more ways than one, the Ekiti election should be of utmost priority not only to the good people of Ekiti but also to all well meaning Nigerians as it will be a pointer to the trajectory the 2019 election will take. Beyond these, Ekiti people are going to be greatest beneficiaries of a free, fair and transparent election but would also be the worst victims, both in the short and long terms, should the exercise go wrong and be tainted with irregularities.

To this end, the people themselves have huge roles to play. By now, it is expected that the parties would have done enough in terms of voter education, much of which must centre on the need for the electorate not to allow themselves to be influenced by money or such other fleeting gifts that might be offered to them by desperate politicians to buy their conscience and sway their votes their way.

It is instructive to note that those who have brought hunger to the land might have deliberately done so in order to find it easy to induce the electorates, pauperized by shallow and failed government policies, during elections.

It was the mistake people of Ondo Sate made. Allegations of heavy inducement by critical actors at the November 2016 election filled the airwave as it was alleged that the electorates were offered between N1,500 and N5,000 for their votes depending on location and importance of polling areas to those behind the inducement, for the people to vote for them.

And, of course, with the level of hunger in the land, a majority of the people were said to have grudgingly accepted the inducement as a palliative to their hunger, an action which radically changed the expected outcome of the election to favour those who made the offering to the voters.

However, what such voters refused to realize was that they were actually selling away their future and birthright for pittance. Just about two years after a new government took over the seat of government in Akure, pregnant women took to the streets in lamentation, wailing and gnashing of the teeth on how the new government had cancelled the free childbirth policy run by the previous government which, by the alleged inducement from another party, was voted out.

That protest by pregnant women in Ondo State was one never witnessed in a long while in the history of our nation where pregnancy is held in high esteem and treated with enormous care. But on this day, the pregnant women threw caution to the wind and took to the streets protesting the imposition of what they described as exorbitant fees on their medical care by the State government. Unfortunately, some of the pregnant women could have participated in the electoral largesse by politicians at the Ondo State governorship election, voted against their conscience, and a government of the Peoples Democratic Party, PDP, that had hitherto provided them with free medical services.

When the APC government took over, the women accused the government of increasing their ante-natal care fees from N1,000 to N4,000, and an imposition of N500 fee for every appointment they had at government hospitals, appointments they acknowledged used to be free under the PDP-led government of Dr Olusegun Mimiko. The major grouse of the protesting pregnant women was the N25,000 fee imposed on them for normal delivery, a service that used to be absolutely free before the November 2016 governorship election.

As if taking a cue from the pregnant women, and right about the same period, students of Adekunle Ajasin University, Akungba Akoko (AAUA) also took to the streets to demonstrate against the hike in fees by the current Arakunrin Rotimi Akeredolu-led Ondo State government. The fees, according to the protesting students, were hiked from N25,000 and N30,000 under the PDP-led government of Dr Olusegun Mimiko to between N120,000 and N250,000 under the Akeredolu-led APC government.

Sadly, some of the students could also have partaken in the electoral largesse politicians threw their way on election day, and they sold their long term benefit of having a considerate government that cared for them in power for a short term benefit of even meagre cash that would not last them more than a day or two.

Long after receiving the pittance to buy their votes, pregnant women, students and other indigenes and residents of Ondo State are now crying and regretting their mistake.

As Ekiti governorship election takes place, some might have also prepared to replicate the vote buying system allegedly deployed in Ondo to Ekiti, as the principal actors allegedly behind the money-for-vote action have since relocated to Ekiti to perpetrate the same ignominious act. The people must resist the temptation of eating sumptuous meals for a day or two with the money they get induced with only for them to be faced with long term realities of economic hardship, social dysfunction and draconian policies after having helped put a rudderless government in place.

The Bible says it is always better to eat vegetable where there is love than to eat meat where there is hate (Proverbs 15:17. Governor Peter Ayodele Fayose has proved that he loves his people; he stood by them in the darkest hour and prevented the State by going the bloody ways of Plateau, Benue, Nasarawa, Zamafara et al when he braved the odds and against a dangerous tide, signed the anti-open grazing bill into law. The people must allow themselves to be guided by their conscience. No State deserves to add to itself the enormous suffering and hardship imposed on Nigerians by the APC-led federal government. that would amount to double jeopardy!

They should remember that their vote is their right, their power and should not be exchanged for any filthy lucre that commits them into a world of paid silence in the face of maladministration. They must be vigilant and ensure that those who have played a part in dragging the entire nation into its current comatose state of anomie where insecurity, unemployment, flagrant abuse of citizens’ rights, selective obedience of court orders, economic hardship etc have become the lot of Nigerians, do not have a foothold in Ekiti.

It was the same mistake Nigerians had made earlier that the people of Ondo State made at their last governorship election, hence, they suffer double tragedy as policies of their state government do not appear people-oriented or friendly thereby giving room for avoidable demonstrations, coupled with the obvious ineptitude exhibited at the centre.

Almost all the states that made the same mistake Nigeria made at the last presidential election in 2015 where the current ruling party was voted to power are in one form of turmoil or the other today. From Benue to Zamfara to Nasarawa to Kaduna, to Adamawa etc, their people are now wailing in regret. The people of Ekiti have enough examples to learn from that they have no excuse whatsoever to make the same mistake others before them made only for such people to turn around in regret and start demonstrating shortly after.

Apart from attempting to induce the people with cash and other items, the people should also beware of those who come to them with flattery, vain eloquence and empty promises. Some Nigerians allowed all these to sway them in 2015 and today, we are all suffering because of it. Ekiti people must prove that they are not as gullible. They should know by now those who made promises but could not keep them rather they have driven the country to a state far worse than they met her; such people promise paradise but what they actually carry in their bosom for delivery is hell. Ekiti people must watch out for such people. They must not allow themselves to be intimidated or hoodwinked by any means to look away from guarding their votes from the polling units to the final collation centre. It is a battle for the soul of the State, and vigilance is the ultimate price for safety.

Will they be intimidated? Yes, the intimidation has already begun? But Ekitikete must stand their ground; Ekiti must not be sold or handed over to those who have proved that they mean no good with their rudderless performance at the centre.

Those who are deployed to the State for one assignment or the other whether as security officials, INEC officials, observers, pressmen etc, must ensure that they carry out their duties with utmost sense of patriotism and not cooperate or participate in any attempt to rob the people of their electoral choice. The eventual outcome of the election must reflect the people’s voice and will. This is the least that these and other stakeholders owe not only the people of Ekiti State but also Nigerians, and, indeed, the entire world.

As the clock ticks towards D-Day, it is imperative to remind voters of the local proverb which says that when the frog in front jumps into a deep hole, it teaches the other ones behind a lesson. Ekiti people must learn from the costly mistake Nigeria made in 2015 and avoid same on July 14. This is the least they owe themselves and posterity. They should allow sound judgement based on history and good conscience guide their choice at the election.