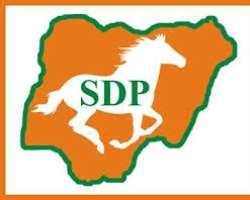 The Social Democratic Party (SDP) in Osun State has written the Independent National Electoral Commission (INEC) on the crisis tearing the party apart in the state just as it expressed shock at the blatant disobedience to court orders by the electoral body.

In a letter dated July 12th, 2018 and signed by two of applicants to the suit filed at the Osun State High Court, Alhaji Rasheed Mayowa and Chief Azeez Alakinde-Ismaila and addressed to INEC National Chairman, the party explained that all the congresses done by the Senator Iyiola Omisore’s group were against court orders.

While attaching the two separate court rulings barring the Omisore’s group from conducting any congress and copied same to the state Commissioner of Police, the Chief Ademola Ishola faction of the SDP urged INEC to abide by the directives of the court by

Part of the letter reads, “In spite of the preservative orders of Honourable Court made on the 29thday of June, 2018, the defendants proceeded with the ward congresses in Osun State on the 30th of June, 2018 and 2nd of July, 2018 of local government congresses. The untoward and unbecoming attitude of the respondents including INEC did not only constitute disobedience to the order of the Court, but affront as well.

“Consequent upon the insolence and inimical effrontery of the defendants towards the order of the , court made on the 29th of June 2018, we filed a motion on notice dated 2ndday of July, 2018 praying the court for an order of mandatory reversal of the congresses held by the respondents in contravention of the order of the court.

“On the 3rd day of July when the matter came up, the court delivered a ruling in which the court maintained that ‘all orders made earlier however remain valid and have not been discharged’.

“In spite of the ruling of this court, on the 2rd day of July, 2018, the respondents held another congress on 7thday of July, 2018. It is important to note that the orders of courts are meant to be obeyed and any grievance towards the order can be expressed by appealing against the said order.

“The respondents, including INEC in the above referred suits have not appealed against the order and the ruling of the court but rather disrespectful disobeyed the preservative orders and rulings of the court, which did not portray the commission in good image.

“In the light of this, it is apposite to state that we are still in office as part of the state executives and are ready to perform our duties and responsibilities as contained in our constitution. We humbly implore you to ensure that the commission obeys the court orders”, they stated.