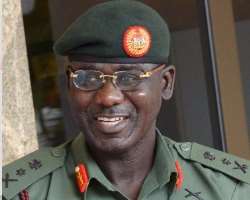 The Nigerian Army, Monday handed over 183 children associated with armed groups in the course of the Nigerian Army operations in the north east to Borno state Government and United Nations UN.

The Chief of Army Staff COAS, Lt. Gen. Tukur Yusuf Buratai who handed over the children immediately after signing of a Memorandum of Understanding MOU held at the Officers Mess Maimalari Cantonment Maiduguri said the Nigerian army officially handed over the arrested children associated with armed groups during the Nigerian army operations in the north east after through and vigorous screening and interrogation of the suspects having found them safe and fit to be rehabilitated and reintegrated into the society.

COAS who was represented by the Theater Commander, Operation Lafiya Dole, Major General Rogers Nicholas thanked the state government and UN for their support and cooperation to accept them for rehabilitation before they will be reintegrated into the society.

Governor Kashim Shettima in his remarks thanked the Nigerian military for clearing and releasing the children while appreciating the efforts and sacrifices of the Nigerian armed forces.

Represented by the State Commissioner of Women Affairs and Social Development, Hajiya Fanta Baba Shehu, he also commended the Nigerian Military for their bravery and commitment.

He further thanked the Chief of Army Staff COAS, Lt. Gen. T. Y. Buratai for his untiring efforts in ensuring that peace returns to the state, north east and country at large.

He also congratulated the children for their successful clearance and subsequent release by the Nigerian army for rehabilitation and reintegration.

The UN Resident and Humanitarian Coordinator, Mr. Mohammed Malik-Fall thanked the Nigerian military for clearing and releasing the children and appreciated the efforts and sacrifices of the Nigerian armed forces in it's general operations in the north east.

He also commended the Nigerian military steadfastness and perseverance in its operation Lafiya dole in the north east , stressing that, without the astute leadership of the COAS, the 183 would not have been cleared and released .

Represented by Mr. Ibrahim Sesay of the UNICEF Office Maiduguri, he said, so far, the UN have received 2000 children cleared and released by the Nigerian army while assuring that UN was ever ready to work in collaboration with the Borno State Government Ministry of Women Affairs and Social Development to provide the children with the necessary training and support that will transform them strategically.

He added that all arrangements have been made to ensure that the transfer or handing over of the children was in accordance with the international standard including psycho social assessment and care or training within the UN system, national and international care for mental Health including reintegrating them with their families.

Malik Fall also said that there will be both medical and mental care facilities for the children apart from the specialized training and care that will be provided for them as already over 7000 children have so far been rehabilitated and reintegrated by the UN.

He pledged to continue to collaborate with the relevant authorities to give the children all the necessary rehabilitation and hope before their reintegration in collaboration with the other INGOs and development partners which an MOU has been signed between the UN and the federal government as part of the strategic partnership along with the state government institutions.