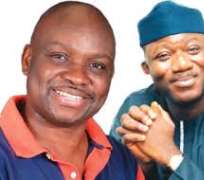 A renowned blind cleric, Prophet Muideen Kasali, has warned against subverting the will of the people and that of God in Ekiti on the July 14 Governorship election, saying such may scuttle Nigeria democracy.

Prophet Kasali also called on the Federal Government to put an end to the insurgency and incessant killings in some parts of the country before the 2019 presidential election.

The popular blind cleric who is the General Overseer of the Hour of Mercy Prayer Ministry Worldwide(Oke Alaseyori), spoke during the July edition of the monthly Hour of Mercy programme of the church in Ibadan, the Oyo State capital.

He urged politicians in the state to eschew violence and not turn the state into a battlefield in the name of election saying God will avenge such unwholesome acts on the household of whoever is plotting such.

Speaking further on Ekiti, the cleric said the 2018 governorship election in Ekiti State would be full of surprises.

“God told me mighty men will fall in the election and the humble shall be exalted to bring a man after His heart to succeed Governor Ayodele Fayose. This He said will happen in a miraculous way.

” Politicians must not promote violence in the coming Ekiti election. God said He would visit His anger on the household of whoever does that. The results of the election must not be manipulated. Independent National Electoral Commission (INEC) and other stakeholders in the election must be fair and thorough in their conducts.

“Votes of Ekiti people must be allowed to count. The electoral process must not be manipulated in favour of any candidate and actual winner declared winner of the election. God told me if the conduct of Ekiti election is fraudulent, the 2019 general election will fail.

“We must be careful to do the right thing concerning Ekiti elections otherwise, it may mark the end of democracy in the country. Thousands of vision and prophecies may not work, President Muhammdu Buhari must take the issue of security seriously in this country. If adequate security of lives and property cannot be guaranteed, God said we should forget the 2019 elections. ”

He, however, said God promised to prove himself as far as 2019 is concerned but was not told how He will go about it.

On the killer herdsmen activities in the country, the cleric said God is set to intervene in the situation as their operations will be curtailed soon.

“Power will change hand on the activities of the killer herdsmen soon. Their sponsors and promoters will soon be fished out, apprehended and prosecuted. God said we should relax and see what He is about to do about them. What we do not know is that, those that are behind their operations are somewhere plotting to wreak havoc on daily basis, but it is another thing and different people we are suspecting to be the brains behind the heinous crime they are committing”.

Commenting on the plan by the federal government's intention to establish cattle ranches across the country to curb herdsmen/ farmers clashes, he said that may not be solution as other groups in the related business could be making such demand which may the difficult for government to meet.

Kasali urged Nigerians to continue to pray for President Buhari, to be able to deliver on his electioneering campaign to the people. (Vanguard)