We Are Working Hard To Address Farmers, Herdsmen, Others Clashes In the country- Buhari 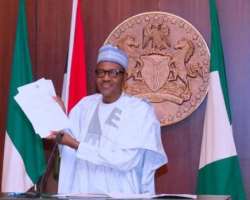 President Muhammad Buharu has assured Nigerians, that his administration is working herd to address and tackle the Farmers, herdsmen clashes and other security challenges across the country.

The president stated this while addressing troops and guests at the grand Finale of the Nigerian Army Day Celebration (NADCEL) at Headquarters 8 Division Task Force Nigerian Army, Kinnasari continent Monguno on Friday.

"I want to assure Nigerians that the herdsmen, farmers clashes are being addressed and the perpetrators of the act will be fished out and brought to justice," the President added.

"this administration in last three years have seen security Chalenges in some States by some disgruntled politicians, causing argument and mayhem seeking political relevance, we will fish them and will deal with them accordingly, " he further added.

He said "I want to assure the families of the remaining Chibok girls and the only remaining Dapchi girl, Liya Shuabu and the world that their children will be rescued"

President Buhari stated that the holding of 2018 Army Day in Monguno, northern Borno will show to the world that the negetivie associated with northeast is now a thing of the past,stressing it will also showcase the renovations research and invention of he Nigerian Army.

In his message, the minister of Defense, Mansur Danali said that the theme of this years celebration is apt and timely, as Monguno is a strategic socio economic point of the economy of the country.

" our Dear country is facing many security challenges but this administration has put in measures to address them", he said.

In his good will message, Governor Kashim Shettima, while commending President Muhammadu Buhari and the armed forces stated that the good people of the state would remain indebted to them.

He said " we have crossed the Rubicon of Boko Haram insurgency and we are on the path of sustainable peace. This may not come with the challenges such as Bombings. We see bombings as a sign of defeat".

Also speaking, the Chief of Defene Staff, General Abayoi Olonisakin said that allowing 2018 NADCEL in Monguno has clearly shown to the world the capability of the Nigerian Army in dealing with Boko Haram insurgency and other security challenges.

In his welcome address, the Chief of Army Staff (COAS), Lt. General Tukur Buratai said the various security challenges across the country and insurgency has made the Army to make some research, Innovation and technological advances in their quest to adequately address the challenges.

"This years' Army Day celebration is unique, as it also have a humanitarian aspect with a view to not only clear insurgents in Northern Borno but resettled and restore the socioeconomic development of the northeast" Buratai stated.

President Buhari also during the visit observed 2 Rakat prayers with the troops of the Nigerian Army.