... As APC Candidate Parleys Workers, Artisans, Others
By Yinka Oyebode 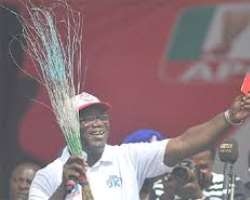 The governorship candidate of the All Progressives Congress (APC) in Ekiti State, Dr Kayode Fayemi, has allayed fears over rumour that he plans to sack workers, saying that as a worker-friendly leader, he will never pursue policies that will cost Ekiti people their livelihoods.

He made the clarification on Monday at interactive sessions with religious associations, Timber Traders Organisation, Tippers Owners/Drivers Association, NLC, NUT and artisans, among other groups. They in turn pledged their support for him in the July 14 election.

At interactive meetings in various sessions in Ado-Ekiti, Ekiti State capital, they said the confidence they had in Fayemi informed their decision to join in the interactive sessions to listen to his campaign messages and present their own demands.

Timbers association members thanked the APC candidate for the right environment he created for their business between 2010 and 2014 when Fayemi was governor, saying that the gesture informed their decision to support him.

They also thanked him for donating a bus to them as a mark of recognition, regretting, however, that the present administration of Governor Ayodele Fayose punished them for supporting Fayemi in 2014.

They vowed to support Fayemi despite victimisation, even as the association warned members not to submit their voter cards to the Government House as allegedly being demanded by the governor.

Christian Association of Nigeria (CAN) emphasised on security in the state and across Nigeria, saying that security must be guaranteed to create friendly atmosphere for peace to reign and thanked Fayemi for donating a bus to the association.

They said that the governorship election must be seen as a collective project irrespective of political differences to ensure peace and progress for Ekiti State.

Fayemi said he was an apostle of security and peace, including the security of jobs, which is the most important aspects of security for development.

Explaining that he never advocated creation of cattle colony in Ekiti State, Fayemi said herdsmen's crisis is not about Christian or Muslim but a crime that must be punished according to the law, regretting that the security measures he put in place in the cattle-rearing zone at Iyemero and Oke-Ako to maintain peace while he was governor was summarily cancelled by Governor Ayodele Fayose who, he said, was over-dramatising herdsmen's activities in the state.

He regretted infrastructure deficit in the state, citing Ado-Ekiti road contract from Ado end to Iju-Itagbolu end he awarded and paid for but was cancelled by Fayose and diverted elsewhere.

At the session with NLC, the workers' association led by Ade Adesanmi appreciated Fayemi for his landmark achievements during his first term.

The union demanded for Fayemi's explanations on rumours that he will sack workers when elected.

Fayemi said he had always been a worker-friendly governor, having increased their salary three times in four years and paid relativity package while 25 per cent for rural posting and core subjects allowances were also paid and was the first governor to pay special salary to health workers while also pensioners' benefits were also increased, including introducing biometric salary payment that eased burden of salary payment system.

Noting that he was the most generous governor to teachers and workers in general, he said he never sacked a single worker but engaged doctors, teachers, civil servants and moved teachers in local government to where they could do better professionally to advance their careers.

He said he paid the highest Christmas bonus, adding that there was no governor that provided in-house and overseas training for workers than him.

He admitted that like in other systems, there might have been issues that didn't go down well with many people, but said resolving the issue is what is important as a receptive leader.

He apologised for taking decisions that might have hurt at individual level, saying, however, that misinterpretation of policies created some of the misgivings between the government and workers.

He cited teachers' assessment scheme that was misunderstood as an assessment examination to demote, sack or promote teachers, explaining that the policy was to develop a programme that would assist them in their capacity building through seminars and workshops.

Explaining that he was never engaged as a consultant by Kaduna State government to sack teachers, Fayemi emphasised the importance of communication, saying he was an advocate of genuine communication between workers and government for good working relationship and security of their job tenure.

He said he believed that government is a continuum, explaining that this was responsible for the completion of Governor Segun Oni's projects, adding that in all the 133 communities his visited during his campaign tours, there was no community he could not point to four projects.

He promised to make the welfare of workers a priority, saying that would be possible through sourcing from other alternative sources of income outside federal allocations.

He also said he was in vantage position to attract federal support for adequate funding of development projects, citing anchor grower scheme and school feeding programme in which 15 states benefitted, including PDP states, regretting that Ekiti State did not benefit because of bad politics the governor was playing.

He explained that he sought to come back as governor to make hunger history in Ekiti State, stressing that the mission is a collective responsibility for accountability and better conditions of living.

He added that he took N25b bond to be defrayed in seven years, saying that before he left office, he had paid back N14.5b. He said if the repayment protocol had been sustained, full repayment would have completed in December 2018.

Citing the clearance of pensions and other entitlements that were unpaid by his predecessor, Fayemi promised to also clear all salary arrears within six months after assumption of office.

He added that the state had no business owing salaries, explaining that intervention funds, such as bailout and budget support facility, were enough to pay workers.

Muslim organisation thanked Fayemi for counting them worthy in his first term and sought further recognition for both Muslim men and women in government, saying that such would create harmonious relationship for peace to reign.

At a session with the artisans, Deputy Director General of Kayode Fayemi Campaign Organisation, Bamidele Faparusi, urged them to vote against poverty and neglect, assuring that Fayemi will give them adequate recognition if elected.