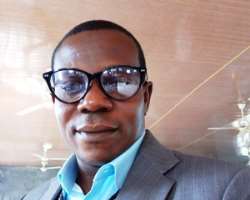 Nigeria as the presumably giant of Africa, suffers one dominant form of moral crisis, namely "pen robbery". Men and women who find themselves in positions of authority use their privileged offices to thwart the law and enrich themselves at the expense of the masses who are the taxpayers. A country where appointed individuals epitomize the anomaly in public governance, where one man uses his/her privileged position to line his/her pocket, using a panoply of actors, themselves beneficiaries of the corrupt system. He/she takes home or directs into his/her private account millions of naira at the expense of the ruled who wallow in poverty.

Nigeria is a country where social institutions are not even as strong as individuals. Our National Assembly clearly exemplify this scenario. They hoodwink the judiciary and the Police. Even if Nigeria is collapsing they are not bothered. All they care for and what influences them most is what goes into their pockets, oiled by the gladiators easy generosity. The Police and the thugs in the Senate and House of Representatives are happy as long as they coordinate the payments of a string of boys who serve different purposes to so further deepen the tentacles of corruption.

However, one thing is promissory in this President Muhammadu Buhari's led regime. His fight against this menace in its entirety is so far crumbling some of the houses of horror. This fight, of course, has started yielding results already, some highly placed individuals have been receiving their due punishments

Many other crimes at their peak of perpetrations are carried out in order to secure quick cash and to undermine social order and enthroned mediocrity. Recall when Mr President said that "some Nigerian youths are lazy... ", which was misrepresented by some 'lazy' subjective critics and distracters who play folly and pretend to have much love for our endear youths than Mr President. I believe you would agree with me that the "Africa President", President Muhammadu Buhari, has put his best to curbing some of these social vices that have so far bedeviled our dear country, Nigeria. The vices of drug menace, advanced free fraud(a.k.a 419), cultism, oil thievery, armed robbery, lack of mutual trust, piracy, political assassination, obtaining by tricks(OBT/Yahoo+), snuggling and kidnapping, prostitution and trafficking in human person, keep knocking our doors daily.

In all, hitherto responsible individuals to whom leadership is enthrusted, betray social trust and prefer personal advantage to social wellbeing. There is need for all well-meaning Nigerians to rise up to occasion to help in the fight against the growing rise of social disorder and the emergence of negative values in an erstwhile orderly social polity.

Divramredje Lawrence Efeturi is a social activist, poet and writer