Much ado about nothing on recovered loot 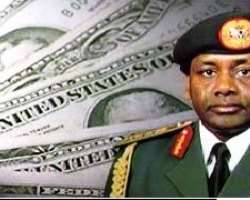 I have found it absolutely necessary to write again in reaction to the Federal Government's decision to share what it described as 'Abacha's loot' if any among the poorest Nigerians.

Sometimes, I laugh when I see some senseless decisions and policies often taken and formulated by the Buhari administration. It is a hopeless case of leaving leprosy uncured and paying heed to common rashes.

There is no denying the fact that the Abacha junta was miles better than this administration which has only succeeded in bringing unspeakable woes and misery to Nigerians at home and abroad because the decisions and policies the government take and formulate there often fail to impact positively on the citizenry. For those living outside the shores of Nigeria, extra money is often sent home for the maintenance of their relatives and other dependants.

Our salaries have not been increased but rising cost of living in Nigeria which our relatives and dependants have to contend with often see us carrying additional burdens which impact negatively on our standard of living.

Now the Nigerian government did say it had concluded arrangements to share the $322 recovered loots from the late Head of State among poor Nigerians.

Who is not poor in Nigeria? According to a recent news report on CNN, Nigeria has overtaken India in extreme poverty ranking in spite of the billions of dollars flowing daily from her oil wells.

Official figures released by World Poverty Clock which the Federal Government swiftly denied, say 'estimated 87 million Nigerians, or around half of the country's population live on less than $1.90 a day'.

The question that agitates this writer is why would the Federal Government want to share what it described as recovered loot among poor Nigerians in a country that suffers an acute shortage of the means of production? Have they considered the resultant effects of that decision in terms of inflation and the like?

Sometimes, one is moved to tears over decisions often taken by the directionless regime in Abuja which is speedily bringing the country to its knees. There is no single Nigerian politician with the intent to genuinely serve the country. President's Buhari's resolve to share this money among poor Nigerians is none other than pursuing a second term in office. I say this with all emphasis because there are other sectors where this money could be deployed to better the lives of the citizenry.

Nigeria's infrastructures are in a sorry state, in fact, the decay is alarming, power is almost non-existent in Nigeria because there are some Nigerian communities that have been thrown in darkness for over one year. No new roads have been constructed to open up rural communities where agricultural produce could be transported to urban centres.

According to recent reports, Nigeria is increasingly becoming one of the most dangerous countries in the world to live and this scares away foreign investors thereby swelling her sack of otherwise avoidable woes.

The government of the day often sing with recovered loot to paint a wrong picture to the world that it is working. Under normal condition, one expects such monies to be ploughed back with all speed to revitalize the ailing economy. Ironically, Nigerians lived better lives under the successive administrations under which loot were reported.

Instead of thinking about how to address these thorny issues, the Buhari government is more interested in elongating its directionless tenure employing its propaganda machine to demonize the regimes of his predecessors to the detriment of the pauperized hoi polloi and this ought not to be after all.

It is a thousand pities that any report released by global institutions the Buhari government quickly rise to contest it. Amnesty International has released many reports about the goings-on in Nigeria, so also are the reports by World Clock Report, BillGates Foundation and others.

Only recently, World Economic Forum ranked Nigeria as the fifth most dangerous country in the world which the federal government also swiftly rise to refute.

Why making swift denials of the obvious? It is very clear and, however, without dispute that never a time has Nigeria witnessed the magnitude of insecurity ravaging every nook and cranny of the country with deaths here and there.

Human life in Nigeria has lost its value and in fact, becoming increasingly worthless as lives are being taken at the drop of the hat. Nigeria's security architecture has completely broken down considering the spate of killings across the country especially in the Benue, Taraba, Plateau and Zamfara axis where scores of Christian communities have been sacked by rampaging herdsmen and Janjaweed armed militias.

There are other areas crying for attention. Hence, it is very unfortunate that the Federal Government under Buhari is more interested in power retention than providing lasting solutions to problems that are increasingly putting our nation on the brink.

It is very unfortunate that President Buhari has surrounded himself with people who have failed to tell him the truth. Is it clear to him that all is not well? On what basis, come to think of it, is he seeking tenure elongation when the current one is nothing short of an unmitigated disaster? What remarkable thing is on the ground apart of abysmal failures on all fronts to warrant his re-election? These are certainly searching questions begging for answers.

And for those who canvass support for his re-election, if they think things would by, a twist of fate, get better, they have got another think coming. In terms of security, the Buhari government has not only failed woefully but marvellously!

On the economic front, Nigeria is at a low ebb. The recent report by the World Economic Clock is a pointer to that fact. In terms of infrastructures, Nigeria is miles behind other countries on the continent. Do other Nigerians not see what we see? Are they so small-minded and parochial not to admit facts as they are?

Global institutions have often spoken and released reports about the state of affairs in Nigeria but in a sheer display of an appalling buffoonery, Buhari's cult-like supporters dismiss these reports with a trivial hand while the country continues to sink!

There is no denying the fact that Nigeria boasts of the best brains across the world. So why has Buhari and his cast of neophyte actors suddenly become the best out of the lot? This worries my soul which informs my interest and desire to react with this witty rejoinder.

That money $322 million if ever such was returned to Nigeria should be channelled into other sectors crying for attention and not to woo voters to install another vissionless government with the same radical Islamist that has become a burden which everyone wants to do away it. I ask yet again, has Nigeria become a country of the visionless where the blind man is king?

Abacha who they often sing with did much better than Buhari on every front. There was a great deal of micro and macroeconomic stability during that administration. That was also a time Nigeria enjoyed comparative peace. Nigerians slept with two eyes closed and the attempted insurgency by the Islamist Maitassine sect was ruthlessly crushed within 72 hours.

Hunger, as it is sadly the case today was non-existent and the US dollar remained at N80 for over 5 years even when oil sold for less than $50 per barrel at the time. Remote outposts were opened up with good roads that kept oiling the economic machinery of the country.

In sports, Nigeria excelled. The Abacha government invested heavily in sports and this yielded the desired results as Nigeria won many trophies that made the country very popular on the global stage.

Abacha did not have to blame his predecessor, Gen. Ibrahim Babangida but assembled a good team that kept the country going in strength and unity. But what we have today under Buhari is a complete shadow of the Abacha government where Nigeria excelled on all fronts.

I think it is time Buhari threw in the towel and allow competent hands to manage the country instead of pursuing a tenure elongation for personal aggrandizement.

*Iyoha John Darlington is a social activist, political analyst, expert in conflict management and resolution and until recently the International Media Consultant of the Green Party of Nigeria (GPN).