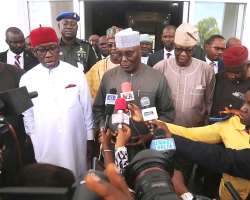 Members of the fourth estate of the realm were prevented from covering the consultation visit of a former Vice President of Nigeria, Alhaji Atiku Abubakar, following alleged stern warning from the mouth piece of the Delta State governor, Mr. Charles Ehiedu Aniagwu, to operatives of the Department for State Security (DSS), the Nigeria Security and Civil Defence Corps (NSCDC) and men of the Nigerian Police Force.

It was alleged that the move was to prevent the wide publicity that would have greeted the visit of the former Vice President who is also a Presidential aspirant in the 2019 Presidential election under the auspices of the Peoples’ Democratic Party (PDP).

It was also gathered that because the state governor, Ifeanyi Okowa, was favorably disposed to the former PDP Caretaker Committee chairman, Senator Amed Makarfi, who also is in the Presidential race.

The alleged clandestine move made the Chief Press Secretary (CPS) to the governor to purportedly give a marching order to bar journalists from covering the arrival of former Vice President Abubakar, at the downgraded Asaba International airport.

It was learnt that the head of DSS at the Airport whose identity was unknown at press time, said “we are under instruction not to allow Journalists into the Airport to cover the arrival of Atiku”.

He stated “All Journalists should go to Government House to wait; they gave us directive to bar journalists so that they cannot give a counter directive without letting us know.

“If you guys don't respect yourselves I will order my men to force you out". He immediately ordered about five mobile policemen, three Civil Defense men and four DSS officials to push us out”, he said.

The CSO of the Government House also prevented Journalists from covering the event as he disregarded them as journalists. He said “ you can go and tell the whole world that security men sent you away from reporting the event”.

Also, at the airport, newsmen were barred from entering the Arrival Lounge as one female operative of the NSCDC allegedly threatened to hit journalists with her gun butt.

The female NSCDC operative, who allegedly had removed her name tag to shield her identity, averred in brute arrogance that “I have orders from the CSO to shoot and if you don’t leave this place now, I will break your leg. I am under instruction not to allow Journalists into the Airport to cover the arrival of Atiku”, it was alleged.

Another officer of the DSS asserted that “journalists should go to Government House to wait; they gave us directive to bar journalists so that they cannot give a counter directive without letting us know.

“If you guys don't respect yourselves I will order my men to force you out”, as he immediately ordered about five mobile policemen, three Civil Defence men and four DSS officials to push journalists out of the entrance of the Arrival Lounge.

On arriving the Government House main entrance, the Chief Security Officer (CSO) further barred journalists from entering the complex, with the excuse that “my job will be on the line if I allow journalists in”, adding “you can report that due to the crowd, journalists could not gain access to cover the visit”.

Meanwhile, few minutes after the consultation visit was concluded monies released to the cheering supporters of the Presidential aspirant were confiscated, leading to uproar at the government house.

The Nigerian Voice Bureau Correspondent who was on ground reports that it became the survival of the fittest, as alleged thugs hijacked and made away with parts of the monies.