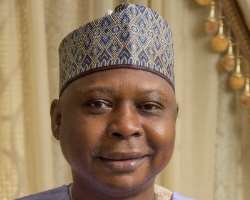 It was Thursday, June 14, a day to the commencement of the Sallah holiday. I sent a message to Sola Atere, spokesman of the Kabiru Tanimu Turaki Presidential Campaign Organization, introducing myself, and asking if I could have a one-on-one, roughly one-hour conversation, with his principal, for my column. In less than an hour or so, I got a reply from Sola saying it was doable, and that it was better for me to take advantage of the relatively low traffic in their office that day. In another two hours or so, the interview was fixed.

I was seated with Sola in his office discussing politics – as adult Nigerian males often do whenever they converge. We have been on it for some 40 minutes or so while waiting for the guest in Turaki’s office to come out. Suddenly the door to Sola’s sparsely furnished office opened, and Turaki walked in with that confidence of senior lawyers. He is a Senior Advocate of Nigeria (SAN). I stood up and gave him a warm and firm handshake. We exchanged a few pleasantries. He drew a seat, and for the next one hour or so, we went toe-to-toe. It was a horizontal conversation in which I mostly played the Devil’s Advocate and asked tough questions, some of them deliberately provocative – without being disrespectful.

I wanted to know why he wants to be President after a number of unsuccessful attempts at becoming Governor of Kebbi State and asked if that is not too much leapfrogging. He did not think so. He gave me a long history of his engagement in politics, starting with the time he was the Secretary of the Youth Wing of the NPN in 1981; his gubernatorial aspirations for Kebbi Sate under various platforms – the United Nigeria Congress Party in 1996 (under Abacha); the All People’s Party (APP) in 1998; the United Peoples Party in 2003 and under the People’s Democratic Party in 2007. He also told me of the various intrigues that prevented him from realising his gubernatorial ambition for Kebbi State, including the cancellation of primaries he said he clearly won. For him, the changed circumstances in the country made him to abandon his gubernatorial ambitions for Kebbi to seek for the presidency of the country. “There is extreme polarization in this country – even among religious sects - in a way that has perhaps never been witnessed before in the country’s political history [since the end of the civil war]. At the same time the electorate is increasingly looking for candidates with integrity and credibility to fix the increasing rot in the system, the increasing disillusionment, the increasing pauperization of Nigerians of all ethnicities and religions.”

I interrupted him and asked whether by talking about ‘credibility’ and ‘integrity’ he was not appropriating the platform which Buhari’s supporters use to promote and market him and whether he did not think that was being uncreative. “Not at all”, he answered. “The truth is that many people who marketed or bought into the candidacy of Buhari on the basis of his supposed integrity and credibility are having buyers’ remorse because there are so many actions of the government that contradict those two attributes”. He argued that though many of Buhari’s previous supporters who marketed or bought into his candidacy because of his assumed integrity and credibility are disappointed, voters are still looking for candidates with genuine integrity and credibility who will additionally possess some critical qualities that Buhari obviously doesn’t have. “I can match Buhari integrity for integrity and credibility for credibility. I have what Buhari has – or is assumed to have - but he does not have what I have – my relative youth and the dynamism that comes with it, my sense of fairness, my being a bridge builder, my being cosmopolitan and my being well- educated.”

I challenged him to give some instances of bridges he has built across the country, which he felt gives him an advantage over Buhari. He gave a few examples, including what happened when Obasanjo’s second term in office was coming to an end and various ethnic groups were laying competing claims on the presidency – the south-south which, he said, wanted it as “the hen that lays the golden eggs, the south-east which felt it was marginalized out of the highest office in the land and of course some Northern groups which wanted power to return to the North after Obasanjo’s tenure – as a matter of entitlement.” He said that as the chairman of the Northern Union at that time, he pressed on the Northern groups that were demanding for the return of power to the north as a matter of entitlement that power must be negotiated with other groups, and not demanded by fiat. He won most of them over, he said, and consequently interfaced with several of the contending groups –Afenifere, Southern Peoples Assembly, Arewa Consultative Forum, groups from the south-south and powerful politicians. He believed that his shuttle diplomacy helped to “ensure the return of power to the North with largely the buy-in of other groups from other parts of the country.”

“Let me tell you, the circumstances have changed in the North. Yes, from 2003 until after the 2015 elections, no politician from the North could offer Buhari a serious challenge. But people have seen Buhari’s performance in the last three years and most people are not finding it funny - whether they are Hausa or Fulani or Igbo or Yoruba. It is not just about increasing poverty but also about increasing insecurity to which all groups are exposed. I can tell you authoritatively that many of Buhari’s former ardent supporters are no longer with him.

“Look at the Shiites for instance; do you think they will support him again? There are other sects and groups that have also become alienated from him. So the circumstances have changed. Even some of his long time, hard line supporters over the years have either become lukewarm towards him or have even secretly abandoned him - so the game has changed. The point is that various ethnic groups, including the Fulanis are suffering from one thing or the other – insecurity, increasing poverty. The election will not be about ethnicity or religion but about fixing a broken country and I feel I am in a good position to play that role.”

I reminded him that performance in office is relative and that assuming that Buhari is underperforming as he contended that it will not, on its own, automatically translate into votes for the opposition groups. He concurs. “Yes, Buhari’s failures will not make him lose the elections. You need someone who can match him or better him integrity for integrity, honesty for honesty, fairness for fairness and at the same time bring other attributes on the table which he clearly does not possess. This is what will make the contrast clear and the choices before the electorate clear. And I believe this is where my strength lies.

“I was Minister of Special Duties and Inter-Governmental Affairs (2013–2015), Supervising Minister, Ministry of Labour and Productivity (2014–2015); Deputy Director-General (North), PDP Presidential Campaign Organization (2014/2015) and Member, Board of Trustees, PDP (2015). I have been investigated severally but nothing has been found against me. I have no EFCC or ICPC case. So I have what Buhari’s supporters believe that he has but Buhari does not have the other attributes that I have. This is the contrast”.

On his chances of securing the PDP’s nomination given that he will be up against very well resourced individuals –Governors and former Governors, including the former Vice President Atiku Abubakar – Turaki did not think that money alone will be the decisive factor in securing the party’s nomination. “Yes, money is important. But don’t forget that Obama emerged as the presidential candidate of the Democratic Party in the US despite not being rich; Shagari became the Presidential candidate of the NPN in 1979 but he wasn’t rich, Buhari has been contesting for the presidency of this country since 2003 under different platforms without being rich. So it is not only about money.”

I asked him what we should expect from him in his first week in office if he becomes the President in 2019. For him, the first challenge, he said, is to restore the confidence of the citizens in this country. “This country is broken, really broken”, he said. “We have never been as polarized as this and this polarization is worsening every day. If by God’s grace I get my party’s nomination and win the election, at the Eagle Square where I will be sworn in, I will give an executive order that all outstanding court orders that have not been observed must be obeyed. This country must be based on the rule of law.”

He also promised that on the day he will be sworn in he will announce some critical appointments that do not require Senate approval while he will send the full list of his cabinet for Senate approval within one week of being sworn in.

Kabiru Taminu Turaki was born on April 3, 1957 at the Nassarawa area of Birnin Kebbi, Kebbi State. He studied Law at the University of Jos (1982-185) and was called to the Nigerian bar in 1986. He also studied Islamic Investment Structuring at the Islamic Finance Institute of Southern Africa (2010). In 2002, he became the first lawyer from Kebbi State and the entire former North Western States to be elevated to the rank of Senior Advocate of Nigeria (SAN). The Dan Masanin Gwandu was a member of the National Political Reform Conference in 2004, as well as a member of the Board of Trustees of the Team Nigeria Trust Fund, a body that was set up to galvanize private sector participation in the sports development and financing in Nigeria. His publications include Intrusion of English Law on the Inheritance of Land in Nigeria (1985); Problems of Bail in Nigeria Law and Courts (1990) and The Challenges of Political Parties: INEC Regulatory Functions vs Electoral ACT, 2010 - (2011).