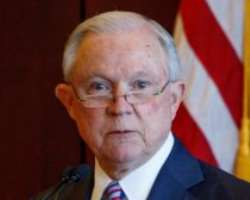 More than 600 clergy and lay members of the United Methodist Church have signed a letter bringing church charges against fellow member Attorney General Jeff Sessions for the  zero tolerance immigration policy  that has resulted in the  separation of undocumented children  from their parents at the U.S.-Mexico border.

The formal accusation , issued on Monday, charges Sessions with numerous violations of the denomination's  Book of Discipline , including child abuse, immorality, racial discrimination and, for his  citation of Romans 13  to defend the policy, the dissemination of doctrines contrary to the standards of the UMC.

Those who signed the complaint letter claim that Sessions' “tremendous social/political power,” his role as a Sunday school teacher and the “severe and ongoing” effects of his actions compel them to call for accountability.

“As members of the United Methodist Church, we deeply hope for a reconciling process that will help this long-time member of our connection step back from his harmful actions and work to repair the damage he is currently causing to immigrants, particularly children and families,”  the letter states .

Justice Department spokeswoman Sarah Isgur Flores declined to comment directly on the church charges against Sessions. She said, “The AG's comments on Scripture were not to justify the policy but in response to other criticism.”

In May,  Sessions announced  that the Departments of Justice and Homeland Security are aiming to prosecute 100 percent of cases of illegal border crossings, regardless of whether those involved are fleeing persecution or traveling with children. The U.S. government separated  nearly 2,000 children  from their parents in April and May as a result of this policy, placing the minors in shelters or with extended family members while their parents are prosecuted.

Sessions has  drawn widespread condemnation  after using a chapter from the Bible to respond to religious critics of the policy.

“Concerns raised by our church friends about separating families” are “not fair or logical,” he said in a  speech in Fort Wayne, Indiana . “I would cite you to the Apostle Paul and his clear and wise command in Romans 13 to obey the laws of the government because God has ordained them for the purpose of order.”

“I have given the idea of immigration much thought and have considered the arguments of our church leaders,” Sessions continued. “I do not believe Scripture or church history or reason condemns a secular nation-state for having reasonable immigration laws. If we have them, then they should be enforced.”

The United Methodist Church is the  third-largest religious denomination  in the U.S., with over  7 million lay members.  Sessions is a member of a Methodist church in Mobile, Alabama, and attends services at another Methodist church in Virginia. HuffPost has reached out to the pastors of both congregations for comment but has not heard back.

According to  United Methodist News , the denomination's official news site, it's rare for Methodists to bring formal charges against a layperson. Complaints that come up are typically resolved at the local level, after a member's pastor and district superintendent offer counseling. If the complaint isn't resolved, it's possible for charges to result in a church trial and even expulsion. This has reportedly  never happened  in the church's history.

The Rev. David Wright, a UMC pastor and chaplain at the University of Puget Sound in Washington state, was the primary organizer of the letter against Sessions. Wright told United Methodist News that he doesn't want Sessions to be expelled from the denomination but is hoping the charges result in Sessions' being called in for pastoral counseling.

“I hope his pastor can have a good conversation with him and come to a good resolution that helps him reclaim his values that many of us feel he's violated as a Methodist,” Wright said.

Many Christian leaders have  rejected Sessions' interpretation  of Romans 13 and spoke out against the zero tolerance policy, including the Council of Bishops of the United Methodist Church.

“Our congregations and agencies serve many migrant families that have recently arrived in the United States. Leaving their communities is often the only option they have to provide safety for their children and protect them from harm,”  the council said in a June 7 statement.  “Tearing children away from parents who have made a dangerous journey to provide a safe and sufficient life for them is unnecessarily cruel and detrimental to the well-being of parents and children.”

Sessions' Mobile church, Ashland Place, is part of the UMC's Alabama–West Florida Conference, which has also been critical of the policy. A spokeswoman for the conference declined to comment to HuffPost about the charges brought against Sessions, saying that details about any complaint are confidential.

In a statement released Monday, the conference's  Bishop David Graves decried separating children from their parents as “unjust acts.”

“I implore congress and the current administration to do all in their power to reunite these families,” he said.