Osinbajo, Tinubu, others storm Ekiti to drum up support for Fayemi 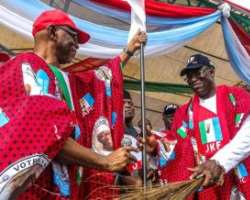 Vice -President Yemi Osinbajo on Tuesday said  the All Progressives Congress, (APC) remains the only party capable of liberating the people of Ekiti state from their current challenges.

The News Agency of Nigeria, (NAN) reports that Osinbajo spoke in Ado Ekiti, the Ekiti state capital, at a mega  rally organised to garner support for the party in the  governorship election on 14 July.

Also the National Chairman of the party, Chief John Odigie-Oyegun said the the people of the state have no  better choice than to vote-in the ruling party at the centre for them to get liberated from the pangs of poverty. Tinubu and VP Osinbajo at the Ado Ekiti mega rally

Oyegun, who said he was shocked by the magnitude of people that trooped out to witness the event, said the development was a clear signal that the Ekiti people were ready to effect change.

The  APC  boss urged the people to replicate the same affection for the party on July 14, 2018 by voting massively for the APC candidate, Kayode Fayemi, who was the former governor and later minister of Mines and Steel. Tinubu, Oyegun and Osinbajo at the rally NAN reports that the Vice-President who led scores of party leaders from across the country to the venue, said there was no  better alternative to APC in terms of good governance.

He urged persons of voting age in the state to obtain their Permanent Voter's  Cards, (PVC's), and vote for  Kayode Fayemi,  who he described as reliable and trustworthy.

” I can assure you all that Fayemi will bring the prosperity that Ekiti is in need of”, he said. Senator Ojudu speaks at the rally

NAN reports that the  high point of the event included presentation of the APC flag to Fayemi  and formal welcome of former Minister of State for Works and one-time National Publicity Secretary of PDP,  Adeyeye who recently switched loyalty from PDP into the APC.

NAN reports that the 14,000-capacity Oluyemi Kayode stadium had been filled to capacity as early as 12 noon, long before  the Vice-President arrived the state at about 2:39pm.

Masqueraders and musicians, led by Adewale Ayuba entertained the crowd.

In an interview, Fayemi said he was convinced that God would deliver the state to him on the election day, saying his decision to seek re-election was not for selfish reasons.

He enjoined all his supporters not to be distracted but remain focused  in their resolve to bring about change in the state.

NAN reports that the Vice president, in company of  the National Chairman of the party, John Oyegun later presented the party's  flag to Fayemi at the rally.